Chennai Super Kings Joins Social Media Trend ‘I Have a Joke On’, Comes up With a Hilarious Line For Daddies Army 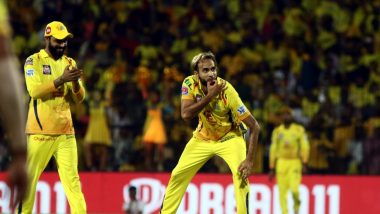 Chennai Super Kings has joined the latest trend ‘I have a joke on’, and have come up with a hilarious line which emphasised that their Daddies Army is yet to turn 30. The latest Internet fad I have a joke on has gained a lot of popularity. The social media users have come up with the most hilarious and sarcastic lines. Chennai Super Kings took to social media and wrote, “We have a joke on the #DaddiesArmy. Waiting for it to turn 30. Lion faceYellow heart.” The reality is that most of the senior players in the Chennai Super Kings' are above the age of 30. The tweet evoked a lot of hilarious responses. A few netizens took a jibe at Mumbai Indians too. IPL 2020: MS Dhoni, Suresh Raina, Ravindra Jadeja and Other Players of CSK Squad to Leave for UAE Between August 10-16, Claims Report.

The franchise is yet to make an official announcement about the IPL 2020. But the IPL Chairman has already announced the dates for the IPL 13 which will start on September 19, 2020, in UAE. The finals will be held on November 8, 2020. The teams are expected to leave for UAE by August 20, 2020. Now check out the tweet posted by Chennai Super Kings below:

We have a joke on the #DaddiesArmy.

Chennai Super Kings' players Ravindra Jadeja, MS Dhoni, Harbhajan Singh are expected to leave for UAE a week before the other teams. The players will leave early to acclimatise to the conditions of UAE.

(The above story first appeared on LatestLY on Jul 26, 2020 11:08 AM IST. For more news and updates on politics, world, sports, entertainment and lifestyle, log on to our website latestly.com).