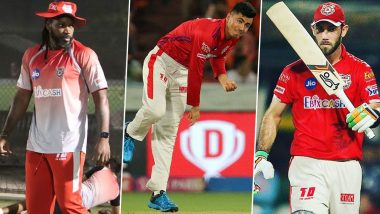 Kings XI Punjab will begin their Indian Premier League 2020 journey against Delhi Capitals on September 20, 2020, at the Dubai International Stadium. The franchise will be led by KL Rahul after Ravi Ashwin moved on to DC for the new season. The Mohali-based side has added some world-class talents to their squad during the player auction and it will be interesting to see how they line up throughout the season. KXIP Squad for IPL 2020 in UAE: Check Updated Players' List of Kings XI Punjab Team Led by KL Rahul for Indian Premier League Season 13.

The last time IPL was played in UAE, Kings XI Punjab made it to the finals for the first time but were unable to win the title, but this time they would be hoping to go one step further. Huge changes have been made to the team ahead of the new season and as a result, have a huge head-ache of deciding their starting line-up. Foreign players will play a crucial role for the side and with only four overseas players allowed in the playing XI, we take a look all the international stars who could be a regular feature for the Mohali team. KXIP Team Profile for IPL 2020: Kings XI Punjab Squad in UAE, Stats & Records and Full List of Players Ahead of Indian Premier League Season 13.

The West Indian is a highly experienced batsman at the top of the order in the shorter format and will once again be crucial for KXIP. The left-handed batsmen will partner KL Rahul forming a destructive opening pair, which if clicked could help the Mohali franchise to their first Indian Premier League title.

The Australian brought back by KXIP during the player auction in December last year and will be one of the most important figures for the franchise this season. Maxwell is a senior player in the squad and will have the onus of playing the role of a leader for the team. The all-rounder has been in good form in recent weeks and will play a crucial role in KXIP’s season.

The Afghanistan bowler took IPL by storm during the 2018 edition but suffered last season as he played just five games throughout the season taking just three wickets. However, this season will offer him a chance at redemption and his form will be important for KXIP going far into the competition.

The West Indian had a mixed IPL 2019, as despite showing glimpses of his talent, Pooran was unable to perform on a consistent basis. However, he has been in good form coming into the new season and will look to make his mark in India’s premier T20 competition as well.

(The above story first appeared on LatestLY on Sep 16, 2020 01:06 PM IST. For more news and updates on politics, world, sports, entertainment and lifestyle, log on to our website latestly.com).