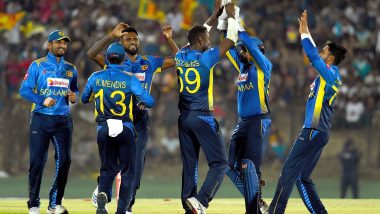 The inaugural edition of the Lanka Premier League 2020 has been postponed at least until mid-November amid the coronavirus pandemic. The competition, which was scheduled to begin on August 28, 2020, and end on September 20, 2020, has been pushed off further and a statement regarding the same was released by Sri Lanka cricket on August 11, 2020 (Tuesday). MI’s Lasith Malinga, RCB’s Isuru Udana to Miss First Few Matches Due to Sri Lanka Premier League?

‘The said decision was taken by SLC in consideration of the health guidelines stipulated by the Ministry of Health subsequent to the meeting held with the Health Ministry Authorities.’ Sri Lanka Cricket added in the release.

It is understood that the Sri Lanka government insisted that anyone arriving on the island for the tournament would have to undergo a 14-day quarantine. With only 17 days until the scheduled start of the competition, and with a two-week quarantine period representing a substantial cost for organisers, SLC was forced to rethink the tournament's timing.

‘We're not the experts, so we had to go with what the health ministry is telling us,’ SLC vice-president Ravin Wickramaratne told ESPNcricinfo. ‘There's a window from November 20th to December 12th, so that is what we are planning. It was not feasible to simply push the tournament back several weeks, as it would then clash with the proposed dates for the IPL, which the LPL is unlikely to be able to compete with in terms of viewer interest.’ He added.

With the postponement of the Lanka Premier League, it means that several players such as Lasith Malinga, Isru Udana who were expected to miss a part of the Indian Premier League’s latest edition, will be able to take part from the start.

(The above story first appeared on LatestLY on Aug 11, 2020 06:12 PM IST. For more news and updates on politics, world, sports, entertainment and lifestyle, log on to our website latestly.com).