Ahead of the much- awaited India tour, the Australians are hosting a T20 match for South Africa. 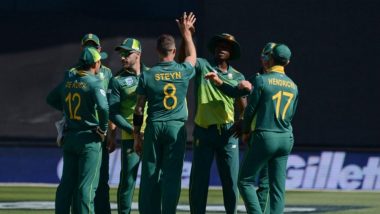 Ahead of the much- awaited India tour, the Australians are hosting a T20 match for South Africa. The match will be played at the Carrara Stadium, Gold Coast today i.e. November 17, 2018. The host, however, had a disappointing sting with the ODI series against South Africa as they lost the match by 2-1 and would surely want to clinch a victory in this game. South African pace battery Dale Steyn, Kagiso Rabada and Lungi Ngidi proved to be fatal for the hosts as they were at the top of the game.

On the other hand, Mitchell Starc, Josh Hazlewood and Pat Cummins - took just eight wickets at 50.38. Australia has played South Africa in a T20I on 17 occasions, winning 11 times. However, Australia has dominated the SA in the home games as they won five games out of six. Now let’s check out the streaming details of the match.

The one-off Test between Australia and South Africa is held today at the Carrara Stadium, Gold Coast tonight, November 16. AUS vs SA One-Off T20 Match is scheduled to start at 1:50 PM IST with the toss at 1:20 PM.

Sony Pictures Network holds the broadcast rights AUS vs SA One-Off T20 Match. For viewers in India, between Australia vs South Africa, T20I will be available live on Sony Six and Sony Six HD channels. For fans in Pakistan, PTV Sports and Ten Sports will telecast the match live.

Where to Get Free Online Live Streaming of AUS vs SA One-Off T20 Match 2018?

Fans looking to watch AUS vs SA One-Off T20 Match 2018 online can download SonyLIV app to catch the action. The free online streaming of the match will be available on SonyLIV’s website as well. Besides it, the AUS vs SA cricket match will be available on Airtel TV and JIO TV app. In Pakistan, the AUS vs SA One-Off T20 Match. If for some reason you cannot catch up with the proceedings of the game then catch the live score and ball-by-ball commentary from here.

(The above story first appeared on LatestLY on Nov 17, 2018 12:00 PM IST. For more news and updates on politics, world, sports, entertainment and lifestyle, log on to our website latestly.com).