Pakistan will lock horns with South Africa in the match no 30 of ICC Cricket World Cup (CWC), 2019. 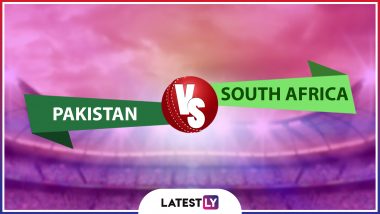 It is Pakistan vs South Africa in the match number 30 of ICC ODI Cricket World Cup, 2019. The action will take place at Lord's Cricket Ground in London today. Both the teams, Pakistan and South Africa haven't had a good tournament so far, where they have won only one game so far. The upcoming match between Pakistan vs South Africa is a must-win game for both teams. The calculation is quite simple, if Pak has to make it to the semis then they will have to win their remaining four matches including the one today. Speaking about Proteas, they have only three games left, even if they win they will have the slimmest of hopes to make it to the semi-finals. Meanwhile, fans in Pakistan, South Africa and India should scroll down below if they are looking for live streaming, online stream and TV details of PAK vs SA CWC 2019 match on platforms like PTV Sports, Hotstar and Star Sports. Pakistan vs South Africa Cricket Score 30th ODI Match.

Pakistan is currently on the 9th position at the point table, while South Africa is on the eighth. Pakistan has displayed some poor batting, bowling and fielding performance in their last match against India where they lost by 89 runs as per Duckworth -Lewis-Stern Method. They were playing as if they were playing just for namesake. Sarfaraz Ahmed led side, last match was exactly one week back, the gap of one week hasn't been good for Pak players as they have been trolled for their fitness, eating habit and various other things. However, they still have a chance to make a comeback in this tournament and answer all their trolls by a victory against South Africa in their upcoming game. PAK vs SA, ICC Cricket World Cup 2019: Mohammad Amir vs Quinton de Kock and Other Exciting Mini Battles to Watch Out for at The Lord's Cricket Ground in London.

Speaking about Faf du Plessis South Africa's side, their biggest blow came in the World Cup 2019 tournament, when they lost their pace bowler Dale Steyn due to injury. Kagiso Rabada and Lungi Ngidi have been good, however, their soul efforts aren't enough for the team's victory. Even Imran Tahir has been economical and if South Africa has to win against Pakistan, he will have to play a major role today. The biggest woes for South Africa has been their batting, as the middle-order collapse and even opening pair doesn't form a partnership for a long time. Pakistan vs South Africa Dream11 Team Predictions: Best Picks for All-Rounders, Batsmen, Bowlers & Wicket-Keepers for PAK vs SA in ICC Cricket World Cup 2019 Match 30.

Pakistan vs South Africa is the 30th Match of ICC Cricket World Cup 2019. It is scheduled to take place at Lord's Cricket Ground in London. PAK vs SA fixture will have a start time of 3:00 pm IST (Indian Standard Time) or 09:30 GMT local time. Toss will take place at 2:30 pm IST or 09:00GMT. With no rains in the picture, expect the match to start on time without delay. ICC Cricket World Cup 2019 – Points Table.

Pakistan top three batsmen Imam-ul-Haq, Fakhar Zaman and Imam-ul-Haq will have to play well and convert their inning into a big score if Pakistan has to win against South Africa in their upcoming game. Mohammad Amir has been bowling well since the past two games and he is expected to come strong on Proteas side too. Pakistan will play next against New Zealand on June 26, 2019.

(The above story first appeared on LatestLY on Jun 23, 2019 02:58 PM IST. For more news and updates on politics, world, sports, entertainment and lifestyle, log on to our website latestly.com).