Colombo Kings will play Kandy Tuskers in the opening match of LPL 2020. This is the inaugural season of the Lanka Premier League and will run from November 26 to December 16. Both Colombo Kings and Kandy Tuskers will be eager to start their season with a win. Colombo have the likes of Andre Russell and Angelo Mathews in their squad. 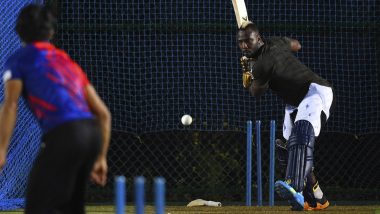 Colombo Kings will play Kandy Tuskers in the first of the much anticipated Lanka Premier League (LPL) 2020. Both teams will look to start the T20 franchise league with a win. The Colombo Kings vs Kandy Tuskers match will be played at the Mahinda Rajapaksa International Cricket Stadium in Hambantota, which will host all the matches in the tournament. Both teams have a number of big stars in their team and they will hope they can fire and lead their side to a win. Meanwhile, fans searching for the live telecast and live streaming online details for the CK vs KT clash should scroll down for all details. LPL 2020 Schedule: Lanka Premier League to Be Staged in Hambantota from November 26 to December 17.

Kandy Tuskers are captained by Kusal Perera and have the likes of Kusal Mendis, Nuwan Pradeep, Munaf Patel, Dale Steyn and Brandan Taylor in their side. Steyn, who replaced Sohail Tanvir in the squad after the latter tested COVID-19 positive, is however not available for the first two matches due to quarantine protocols. The Colombo Kings are captained by Sri Lanka great Angelo Mathews and have power-hitters like Andre Russell, Dinesh Chandimal, Ravinderpal Singh in their side.

Fans in India can live telecast the Colombo Kings vs Kandy Tuskers LPL 2020 match on Sony sports channels. Sony Pictures Sports Network (SPSN) is the official broadcaster for Lanka Premier League (LPL) in India. So fans can tune into Sony Six and Sony Six HD channels to catch the live-action of the opening match of LPL 2020.

Fans can also catch the Colombo Kings vs Kandy Tuskers match on online platforms. SonyLiv, the OTT platform on Sony Network, will be live streaming the CK vs KT LPL 2020 match online for fans in India. Apart from that JIO subscribers can also catch the live action on JIO TV.

(The above story first appeared on LatestLY on Nov 26, 2020 06:16 PM IST. For more news and updates on politics, world, sports, entertainment and lifestyle, log on to our website latestly.com).