MI vs CSK Dream11 IPL 2020: MS Dhoni vs Jasprit Bumrah & Other Exciting Mini-Battles to Watch Out for in Indian Premier League Season 13 Opener 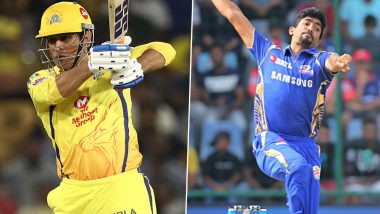 Cricket fans have their eyes on clock as Mumbai Indians are set to meet Chennai Super Kings in the season opener of Indian Premier League (Dream11 IPL 2020). The much-awaited encounter takes place at the Sheikh Zayed Stadium in Abu Dhabi. More often than not, the game goes down to the wire when these two sides lock horns. In fact, their last meeting, which took place in the IPL 2019 final, also proved to be a nail-biter but Rohit Sharma and Co won the game by one run and lifted the title. Well, they’ll aim to replicate their heroics again while MS Dhoni’s men are seeking for redemption. MI vs CSK Dream11 Team Prediction IPL 2020: Tips to Pick Best Fantasy Playing XI for Mumbai Indians vs Chennai Super Kings Indian Premier League Season 13 Match 1.

With Suresh Raina and Harbhajan Singh pulling out of the tournament, CSK have been jolted with two significant blows even before the start of the competition. However, they still have the services of skipper MS Dhoni, Ravindra Jadeja, Shane Watson and Imran Tahir who have a ton of experience in this format of the game. On the other hand, MI will miss the services of Lasith Malinga in this season. However, their confidence will still be head high as Trent Boult will don the blue jersey this year. Also, their team looks balanced in all three departments. As CSK and MI gear up for the opening match, let’s look at some mini-battles which can enhance the thrill of the game. MI vs CSK Dream IPL 2020: Ahead of Season Opener, Let’s Cherish 4 MS Dhoni Staggering Knocks.

The CSK captain will take the field for the first time after the 2019 World Cup, and his performance will be one to watch out. The legendary wicket-keeper batsman is known to take the bowling line-up by storm in the end overs. However, he has to tackle the pin-point deliveries of Jasprit Bumrah in the opening clash. The MI pacer is one of the best white-ball bowlers going around and will like to get the better of Dhoni.

MI Skipper Rohit Sharma has demolished many potent bowling line-ups in the past. The Hitman, however, had a fair share of problems against Deepak Chahar. The CSK pacer tends to move the new ball away, which is not something the veteran batsman loves. With Rohit opening the innings as Chahar starting proceedings with the ball, the two will undoubtedly come across, and result of their battle might prove to be crucial in the context of the game.

Pandya and Jadeja will fight for supremacy of the best all-rounder. The former can hit the ball a long way along with chipping in with crucial overs. On the other hand, Jadeja has the experience of playing in UAE, and the spin-friendly pitches will favour him too. Hence, it will be interesting to see if Pandya will smash huge sixes of Jadeja will pierce his defences. Also, it can be the other way around.

Rohit Sharma and Co are touted to be the favourites of the upcoming clash as CSK will miss Raina and Harbhajan. However, the Men in Yellow have a knack of defying the odds. Hence, the four-times champion can’t afford to be complacent. Also, they have to forget the ghosts of IPL 2014 where they lost all their five games in UAE.

(The above story first appeared on LatestLY on Sep 19, 2020 08:00 AM IST. For more news and updates on politics, world, sports, entertainment and lifestyle, log on to our website latestly.com).