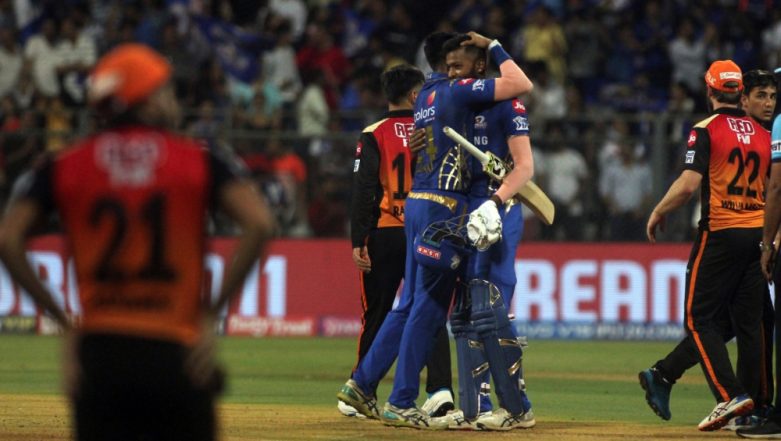 Mumbai Indians (MI) qualified for the Indian Premier League 2019 (IPL 2019) playoffs following a Super Over win against Sunrisers Hyderabad (SRH) at the Wankhede Stadium in Mumbai. The match ended in a tie after Manish Pandey smashed Hardik Pandya for a six on the last ball as Sunrisers were chasing 163. Pandey apparently remained unbeaten on 71 off 47 balls. MI vs SRH Highlights IPL 2019: Mumbai Indians Beat Sunrisers Hyderabad Via Super Over, Qualify for Playoffs.

In the Super Over, Sunrisers managed only eight runs as Pandey and Mohammad Nabi were dismissed in space of four balls. Hardik Pandya and Kieron Pollard the finished the Super Over chase in three balls and handed their side the valuable two points.

After the Super Over win, MI skipper Rohit Sharma said: “feels good knowing that we are amongst the top four now. Not easy to come through the ranks and we have played some consistent cricket throughout and we have the results for it.” Mumbai Indians vs Sunrisers Hyderabad Full Scorecard.

“We wanted to put runs on the board, the pitch played good for all 40 overs and runs on the board is crucial and I knew that we didn't get the score we wanted but we knew if we get early wickets we can put the pressure on their middle order. Manish batted really well and he played some excellent shots but I think the game-changing moment was the eight overs of spin. They bowled very well and contained the batsmen which was very important at that stage,” the MI skipper added.

# This was the ninth occasion of an IPL match going into the Super Over.

# Mumbai Indians now become the third team after CSK and DC to qualify for IPL 2019 playoffs.

# This was Sunrisers Hyderabad's first Super Over in IPL.

# Mumbai Indians have been involved in two Super Overs now.

Earlier, Quinton de Kock scored unbeaten 69 off 58 balls to play the sheet anchor role. The left-hander smashed six fours and two sixes to take his side past the 150-run mark. Apart from him, skipper Rohit scored 24 while Suryakumar Yadav chipped in with 23.