Mithali Raj Birthday Special: Records and Achievements of the Cricket Legend As She Turns 38

Mithali Raj made her India debut at the age of 16 and smashed an unbeaten 114 runs in her maiden appearance for the women’s national cricket team. She has since gone on to represent the national team in 209 WODI matches, 10 W Tests and 89 WT20Is and is celebrated as one of the legends of the game and an all-time great in women's cricket. 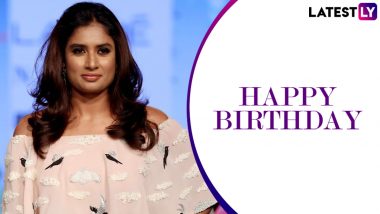 One of the greatest cricketers of all-time and the only women’s cricketer to play at the highest level for more than two decades, Mithali Raj celebrates her 38th birthday on December 03, 2020 (Thursday). Raj is the current captain of the India women’s ODI cricket team and holds the distinction of being the only Indian captain to lead a team to two World Cup finals. A legend of women’s cricket, Raj holds numerous records and achievements to her name and has played an instrumental role in making women’s cricket popular in the country and also worldwide. Mithali Raj Plays Cricket in Saree for a Promotional Campaign Ahead of Women’s Day 2020, Watch Video.

She made her debut at the age of 16 and smashed an unbeaten 114 runs in her maiden appearance for the women’s national team. She has since gone on to represent the national team in 209 WODI matches, 10 W Tests and 89 WT20Is. As she celebrates her 38th birthday, take a look at some records and milestones of Mithali Raj.

Mithali retired from WT20I cricket in September 2019 but is still the captain of the India women’s ODI team. Mithali has scored 6888 runs in 209 WODI matches with the help of seven hundreds and 53 half-centuries. She has also played 89 WT20I matches and scored 2364 runs, which comprises of 17 fifties. Mithali appeared in 10 Test matches for the women’s national team and has a high score of 214 which is the highest in India women’s cricket. She has scored 663 runs in Test matches with one hundred and four half-centuries.

(The above story first appeared on LatestLY on Dec 03, 2020 08:20 AM IST. For more news and updates on politics, world, sports, entertainment and lifestyle, log on to our website latestly.com).