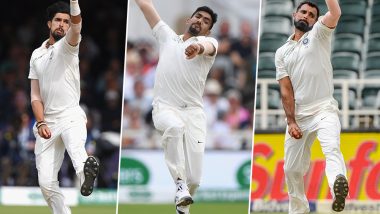 The Indian bowling attack was majorly strengthened by spinners in the past as the side didn’t have many bowlers who can set the speed gun on fire. However, that’s not the case in the modern era. With the likes of Ishant Sharma, Mohammed Shami, Jasprit Bumrah and Umesh Yadav in the ranks, the current Indian fast bowling unit is arguably the best in the world. Even, West Indies legend Brian Lara compared the current Indian fast bowling unit to the famous Caribbean pace quartet in 80’s. In a recent interaction, Mohammed Shami presented his views on the topic and called the current pace attack best in India's history. Mohammed Shami Says Will Need at Least a Month to Get Used to Saliva Ban.

"Even the world acknowledges that India never produced five genuine fast bowlers in a package at one go. Not in Indian cricket's history. We have bowlers in the reserves who can bowl 145 kms. This is the best attack as no one has any jealousy and everyone enjoys each other's success. It feels like a family," Shami told former India wicketkeeper Deep Dasgupta during a conversation for ESPNCricinfo.

Citing the example of veteran pacer Ishant Sharma, the right-arm pacer explained the camaraderie between the fast bowlers. "Look at Ishant Sharma. He is set to play 100 Tests. It's not a mean achievement but if you speak to him you will know what kind of a human being he is. He is so down to earth," he added.

The veteran of 180 Test wickets also said that on many occasions all the three pacers want to take the new balls and in that case, captain Virat Kohli takes a call. "All three of us -- Ishant (Sharma), (Jasprit) Bumrah, and I want to bowl with a new ball. When we are not able to choose, we approach Virat to decide," Shami further opined.

(The above story first appeared on LatestLY on Jun 20, 2020 11:17 AM IST. For more news and updates on politics, world, sports, entertainment and lifestyle, log on to our website latestly.com).