The tournament will kick-start from 16 September 2022 till 5 October. This will be the second season of Legends League cricket. 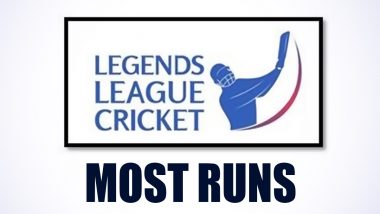 Most Runs in Legends League Cricket 2022

Kevin O'Brien topped the list of highest run-scorers in the Legends League Cricket 2022. The Gujarat Giants batter has racked up 129 runs in two matches so farm with a highest total of 106. India Capitals' Ashley Nurse are second on the list with 113 runs. Mohammad Kaif, Solomon Mire and Parthiv Patel make up number three, four and five in the top five run-getters so far in the tournament. Legends League Cricket is a global cricket league like many others in the present-day with one dissimilarity from the rest that only former cricketing greats are part of this event. The legends who already retired from the sport will be seen once again sprinting on the field in Legends League cricket. Many legendary batters from across the globe will participate in the league. Legends like Chris Gayle, Virendra Sehwag, Jacques Kallis, Ross Taylor and Shane Watson will grace the event with their hypnotic batting one more time and make efforts to stockpile most runs.  Legends League Cricket 2022 Points Table Live Updated: Check Team Standings With Net Run Rate of LLC T20 Cricket Tournament

The tournament will kick-start from 16 September 2022 till 5 October. This will be the second season of  Legends League cricket. Legends league cricket was founded by Raman Raheja & Vivek Khushalani in 2021 to keep competitive cricket alive and kicking among the recently retired. Unlike first edition, four Indian teams will be participating this time in the league. The franchises that will be part of the event are India Capitals, Gujarat Giants, Manipal Tigers and Bhilwara Kings.

Most Runs in Legends League Cricket 2022

The format framed for the Legends League cricket is twenty-twenty. The opening contest of the second season of the league will be an exhibition match to be played on 16 September between Indian Maharajas and World Giants. The first edition of the legends league cricket was held in Oman. However, this time around the league will be played in India across different venues to keep the home crowd rolling.

(The above story first appeared on LatestLY on Sep 17, 2022 08:10 PM IST. For more news and updates on politics, world, sports, entertainment and lifestyle, log on to our website latestly.com).