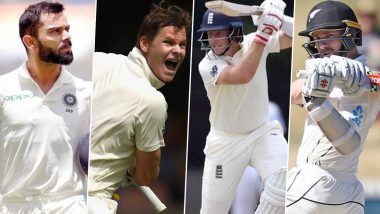 This is the inaugural edition of the ICC World Test Championships and features the top nine test playing nations, viz., Australia, Bangladesh, England, India, New Zealand, Pakistan, South Africa, Sri Lanka and West Indies. New Test entrants Afghanistan and Ireland have been excluded from the Championship while Zimbabwe has resumed playing cricket after a suspension.

A total of 72 Test matches will be played in the tournament with each team playing six Test series each (both home and away). Top two ranked teams at the end of the tournament will then qualify for the final at Lord’s Cricket Ground.

(The above story first appeared on LatestLY on Aug 11, 2020 05:16 PM IST. For more news and updates on politics, world, sports, entertainment and lifestyle, log on to our website latestly.com).