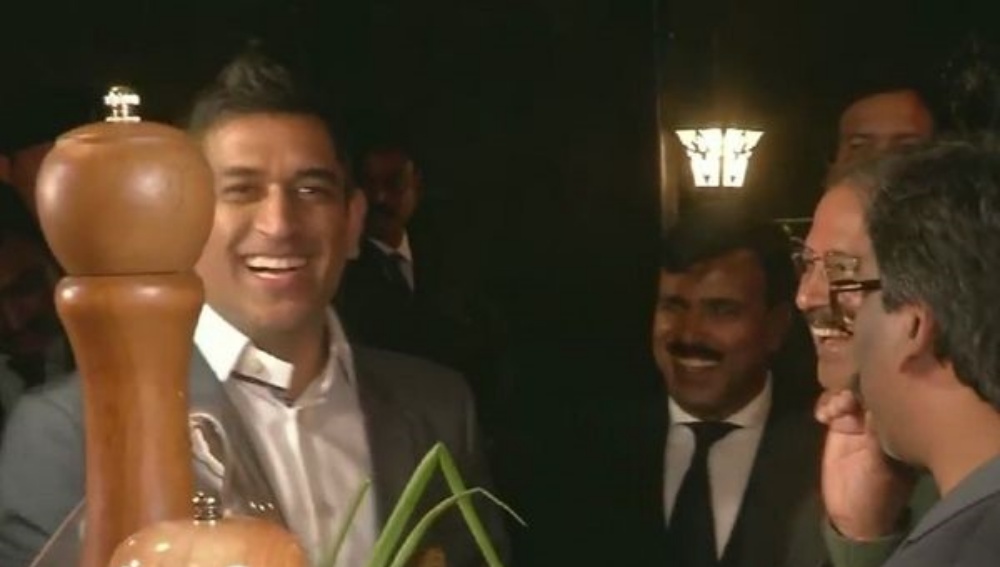 MS Dhoni has been away from international cricket for a few months now. He was recently in the news after the BCCI dropped him from the central contract system. Now MS Dhoni was spotted at an event in the Ranchi. He was seen inaugurating the facilities at the JSCA Stadium along with Hemant Soren, the Chief Minister of Jharkhand. The former Indian captain was seen in a jovial mood and was seen whistling with spring onions along with the CM of Jharkhand. The act brought smiles on the face of the officials who were standing beside the former Indian captain. Jharkhand CM Hemant Soren Meets Cricket Icon MS Dhoni at the JSCA International Cricket Stadium Complex, See Pics.

The clip was shared by one of the netizens. The video starts off with MS Dhoni trying one of the delicacies along with CM Hemant Soren and later having a cup of coffee. Then he picked up a stand of spring onion and tried whistling with it. CM Hemant Soren also joined the act. Obviously, he couldn’t whistle with the strand but Dhoni did not give up. Dhoni looked at a boy and asked him if he wanted to give it a try. Known for his sense of humour, Dhoni was heard telling the officials, “Ye bhi sochega bhaiya log kaisa kaisa game khelte hain (he too will think what are these weird games these guys play).”Check out the video below:

MS Dhoni and Hemant Soren inaugurated the solar power system and state of art gymnasium. "I am happy today to get the opportunity to inaugurate the facilities as chief minister. The foundation of the stadium was laid by Guruji (father Shibu Soren). This stadium is an example of the result of the work started by Guruji. On this occasion, I promise you to develop the state in the same way," Soren said at the event.