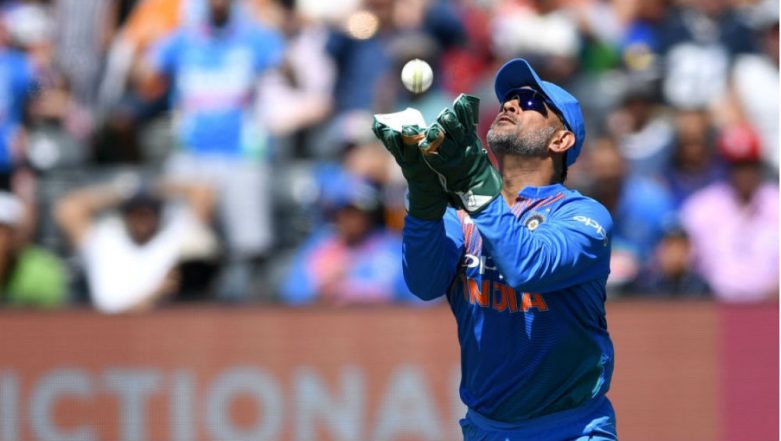 With Indians across all paths of life coming together and showing their support for former India skipper Mahendra Singh Dhoni after the International Cricket Council (ICC) asked him to remove the "Balidaan Badge" from his wicketkeeping gloves, the Committee of Administrators (CoA) running Indian cricket had sent in a request to the ICC asking the game's parent body to allow Dhoni to have the logo on his gloves. But the request has been rejected. MS Dhoni in England for Cricket, Not Mahabharata, Says Pakistan Minister Over Army Insignia on Indian Wicket-Keeper's Gloves.

Speaking to IANS, sources in the know of developments said that the ICC has made it clear that it is not possible to approve the gloves with the 'Balidaan Badge'.

The ICC has told the Board of Control for Cricket in India (BCCI) that the regulations for ICC events do not permit any individual message and that the logo also breaches the regulations in relation to what is permitted on wicketkeeping gloves. #DhoniKeepTheGlove Tops Twitter Trend in India After ICC Asks BCCI And MSD to Get Rid Off Indian Army 'Balidan' Badge From Wicket-Keeping Gloves.

During the CoA meeting in Mumbai on Friday, one of the members had said that approval had been sought so that Dhoni can continue wearing the gloves with the logo.

"Yes, we are aware of the issue with Dhoni's badge. But this is not a political or religious sentiment and we have requested the ICC to grant permission to Dhoni to sport the badge on his gloves," the COA member had told IANS.

An ICC official had said that the council would consider the request if the BCCI convinced them that the logo did not have any political or religious message.

India's opening game in the ongoing World Cup saw Dhoni once again profess his love for the security forces after he was spotted with the regimental dagger insignia of the Indian Para Special Forces on his wicketkeeping gloves.

Speaking to IANS, Claire Furlong, ICC General Manager, Strategic Communications, had said that the BCCI had been asked to get the symbol removed from Dhoni's gloves. "We have requested the BCCI to get it removed," she had said on Thursday. Pakistan Players Wanted Retaliatory Celebration Against India, PCB Says No.

The Army insignia was spotted on Dhoni's gloves as television replays showed him stumping Andile Phehlukwayo in the 40th over of the innings bowled by Yuzvendra Chahal.

"Balidaan" is a distinct insignia of the special forces, which form part of the Parachute Regiment. It has a commando dagger pointed downwards, with upward-extending wings extending from the blade and a scroll superimposed on the blade with "Balidaan" inscribed in Devanagari. Only Paramilitary Commandos are allowed to wear the Balidaan Badge.

Dhoni, who was conferred the honorary rank of Lieutenant Colonel in the Parachute Regiment in 2011, had also undergone training under the Para Brigade in 2015.

Another fan wrote: "This man shows his love for the nation and army. A Regimental Dragger(BALIDAN) of Indian Army Para Special Force on MS Dhoni Gloves. #IndianArmy #Balidan."

But the ICC feels otherwise. The ICC regulations says: "The ICC equipment and clothing regulations do not permit the display of messages that relate to political, religious or racial activities or causes during an international match."