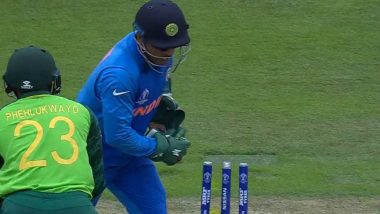 Southampton, Jun 6: Indian wicket-keeper batsman MS Dhoni was seen donning the 'Balidan' (sacrifice) badge on his wicket-keeping glove during the team's ICC Men's Cricket World Cup match against South Africa on Wednesday.' Captain Cool' was spotted sporting the Army insignia, which was clearly seen while he stumped Andile Phehlukwayo. The regimental dagger is the insignia of the Indian Para Special Forces.

In 2011, Dhoni was given an honorary rank of Lieutenant Colonel and he has undergone training for a brief period with the para regiment. During the course of his training in Agra, Dhoni is believed to have done five parachute jumps during the training period. IND vs SA, ICC Cricket World Cup 2019: India Beat South Africa by 6 Wickets, Twitter Lauds Rohit Sharma, Jasprit Bumrah and Yuzvendra Chahal.

The former skipper's love for the Army is well known, as he has often expressed his desire of joining the forces. Earlier this year, Dhoni and the Indian team wore army caps during the ODI match against Australia at Ranchi as a tribute to the CRPF personnel who lost their lives in the February 14 Pulwama terror attack. ICC Cricket World Cup 2019 – Points Table.

India, who began their World Cup campaign on Wednesday, defeated South Africa by six wickets as Rohit Sharma struck an unbeaten century. Dhoni also looked in fine touch in the match as he scored 34 runs but he was dismissed at the end of the match by Chris Morris. India will next face Australia in the World Cup on June 9.