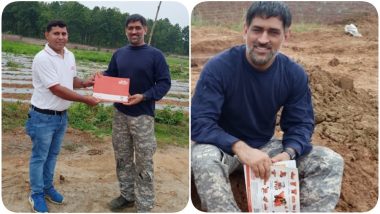 MS Dhoni might have been away from cricket for a year now, but the fans make sure to keep a tab of his happenings. Recently a video surfaced online on the Internet where the Chennai Super Kings captain was seen driving the tractor and was ploughing the field. Now, here's another latest snap of the former Indian captain where he was seen donning the salt and pepper look and his style impressed the netizens on social media. MS Dhoni was all smiles as he was seen posing for a picture with his fans. Virat Kohli Knows About MS Dhoni’s Retirement Plan, Claims BCCI President Sourav Ganguly.

The last time we saw the former Indian captain donning the blue jersey was during the 2019 World Cup which was held in England. Dhoni played his last game against New Zealand where he scored a half-century but this didn't help the Men in Blue win the semi-final game. Now, check out the latest snaps of MS Dhoni below:

I'm always learnt you sir ,you are the best performer,your level is very high whose after you are working just like farmer. so it's learnt about all as a type of person whose understood themselves that i'm bigger.....❤️❤️

I love you mahi sir..

After the World Cup 2019, it was said that MS Dhoni would quit international cricket but that did not happen and he took a sabbatical for an undisclosed period of time and remained unavailable for the rest of the series.

(The above story first appeared on LatestLY on Jun 30, 2020 01:26 PM IST. For more news and updates on politics, world, sports, entertainment and lifestyle, log on to our website latestly.com).