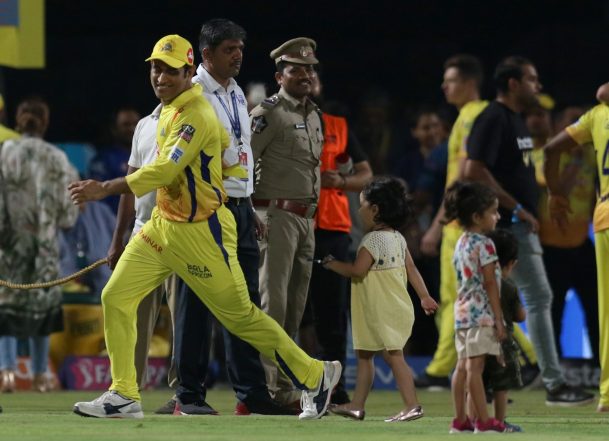 Visakhapatnam: Chennai Super Kings' skipper MS Dhoni along with his daughter Ziva after winning the 2nd Qualifier match of IPL 2019 between against Delhi Capitals at Dr. Y.S. Rajasekhara Reddy Cricket Stadium in Visakhapatnam, on May 10, 2019. CSK won by 6 wickets. (Photo Credits: IANS)

MS Dhoni is a happy man and why not? His team Chennai Super Kings went on to beat the Delhi Capitals yesterday by six wickets and an over to spare. After winning the Qualifier 2 of the IPL 2019, team Chennai Super Kings has now made headway into the finals of the Indian Premier League 12 and will now face the Mumbai Indians in Hyderabad tomorrow. After the team won the game, Ziva and Gracia Raina who were sitting in the stands ran to the ground celebrate the victory with the team. CSK beat DC by 6 wickets.

Along with the other kids of the team who were seen playing their fathers, Ziva was seen playing with papa Mahi after the presentation ceremony. The Chennai Super Kings captain was also in a very playful mood was chased by his daughter who was trying to grab her father. Later even Gracia Raina joined Ziva and MS Dhoni started playing with both the kids. There have been many occasions that the father-daughter duo has melted our hearts with their adorable antics. MS Dhoni and Ziva Share Video Encouraging Everyone to Vote! Watch Adorable Father-Daughter Duo Giving Democratic Lesson to All.

The video of Ziva playing with her father was shared on various social media fan pages. Check out the video below:

Talking about the match, the Chennai Super Kings won the game by six wickets. This is the eight time that the Yellow Army has reached the finals of the Indian Premier League.