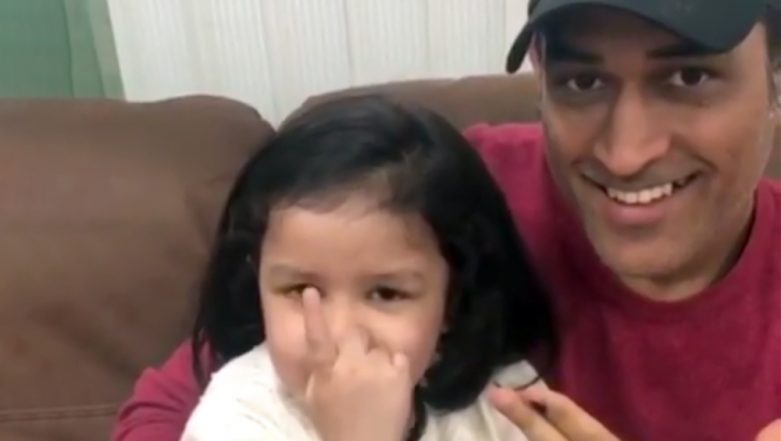 Trust Mahendra Singh Dhoni to communicate and pass forward the best of the ideas in the most effective way possible. The 'Captain Cool' and Chennai Super Kings Thala on Monday, May 6, shared a video with his daughter dearest Ziva encouraging everyone to vote. Dhoni, who hails from Ranchi in Jharkhand, voted today as Ranchi went to polls on Monday, in round 5 of voting for the Lok Sabha Elections 2019. MS Dhoni Says ‘Inshallah’ to Which Ziva Replies ‘Mashallah’! Watch Father-Daughter Duo’s Adorable Video.

MS Dhoni can be seen with the inked finger in the video. But unlike other celebrities, Dhoni did not share a selfie of his with the inked finger. He instead chose to share the message in a much effective manner and through the bright and adorable Ziva Dhoni. Ziva Dhoni Shouting 'Papa' to MSD During Delhi Capitals vs Chennai Super Kings Match is The Cutest Video on Internet Today!

It is no secret fact that Mahendra Singh Dhoni is one of the biggest icons in Jharkhand just as he is all over India. MS Dhoni encouraging everyone to go to and vote is sure to inspire the folks to exercise their democratic right. Dhoni aptly titled his video as "Use Your Power" and as always, exuded the power of his personality. Indian Premier League 2019 – Points Table.

Dhoni is currently engrossed in his IPL duties. His team, the Chennai Super Kings or CSK, has finished on second position after playing all their league matches in IPL 2019. Chennai lost their last game against Kings XI Punjab as they were unable to defend the total of 170 runs. Chennai will now lock horns with Mumbai Indians in the first qualifier of IPL 2019 which will take place at MA Chidambaram stadium. The winner of the first qualifier will directly play the finals on May 12, 2019, at the Rajiv Gandhi International Cricket Stadium, Hyderabad.