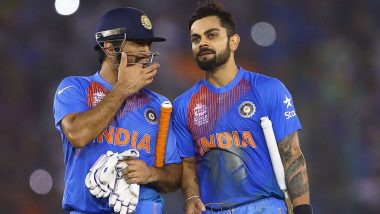 Indian cricket team captain Virat Kohli is one of the best batsmen going around and his record in all forms of cricket is nothing but exceptional. However, former India opener Gautam Gambhir believes that former skipper MS Dhoni should be credited for Kohli’s rise at the highest level. The Delhi-born cricketer got the reins of the Test team during India’s 2014 Tour of Australia. However, prior to that series, Kohli had a disastrous tour of England. In 10 innings of five Test matches, Kohli could only score 134 runs but wasn’t dropped from the side and in the subsequent Test series against Australia, he piled up a whopping 692 runs in four Test matches. MS Dhoni for India Camp Post Lockdown? Experts Divided.

In the latest episode of Star Sports’ show Cricket Connected, Gambhir and VVS Laxman talked about the rise of Kohli after the horrific tour of England. Laxman said that the failure against England helped Kohli improve his game.

"Ya, definitely! That was the catalyst for the change we have seen in Virat Kohli, especially in Test match cricket. But I believe right from the first time I played with him in 2011 when he made his debut, he was always very driven. He came into the dressing and there were a lot of seniors in the dressing room, always asking questions on how to improve his game, how to make sure that he coverts his talent and potential into performances," said Laxman on the show.

The 45-year-old also lauded Kohli’s determination to make a staggering comeback after the series against England.

"But that 2014 series was very important. It was a miserable series. But to come back in such a fashion like the way he did in all the 3 formats, performing consistently and winning matches for India, maintaining high standards for himself is just incredible. He went to Australia and made those centuries and even in South Africa," he added.

Gambhir agreed with Laxman. However, he also went on credit MS Dhoni for not lasing faith on Kohli after a poor series.

"I totally agree with Laxman bhai. The sort of series it was in 2014, even I was there on that tour. You have to give credit to MS Dhoni because a lot of careers have ended after such a series, especially in one format. But he gave that kind of security to Virat Kohli plus his own eagerness," the two time World Cup winner said.

(The above story first appeared on LatestLY on Jun 22, 2020 01:30 PM IST. For more news and updates on politics, world, sports, entertainment and lifestyle, log on to our website latestly.com).