Nasser Hussain Gives His Verdict on Rishabh Pant’s Test Batting Position, Says, It ‘Is One Place Too High’ Ahead of England vs India Tests

Batting at number six has been a productive one for India where he has scored 580 runs, averaging 44.6 in 12 Test matches. His success with the bat cemented his spot in the team as first-choice wicketkeeper. 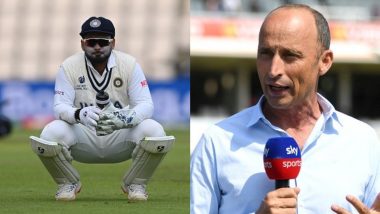 Former England captain Nasser Hussain said that Rishabh Pant batting at number six for India in Tests is 'one place' too high. Virat Kohli's side is currently gearing up for the five-match Test series against England, the first of which begins on August 4. Pant especially has had a good record while batting at number six for India in Tests and his explosive performance in Australia sealed his spot as wicket-keeper batsman in the national Test side. He scored 580 runs in 14 innings and also has a hundred to his name. But Hussain reckons that Pant is batting a bit higher in the order. " Of what I have seen of India, if England can get a par score in the first innings, with the seam-bowling resources they have, then they should be confident." Sourav Ganguly Defends Rishabh Pant for Not Wearing a Mask During Euro 2020, Says ‘Rules Have Changed’

"Rishabh Pant at six in England is one place too high. India will have to find a new opener as Shubman Gill has been ruled out and can they afford to pick Ravindra Jadeja and Ravichandran Ashwin if the ball is moving around? If they play on flat, belting pitches they can," he said, when asked about the possibility of India opting to play two spinners in case of the pitch not being a flat one.

Despite Pant's success, he wasn't able to deliver for India in the World Test Championship last month against New Zealand. He had tested positive for COVID-19 a while ago and is currently in isolation, recovering from the disease.  He is believed to join the team once his report comes out negative.

(The above story first appeared on LatestLY on Jul 20, 2021 04:34 PM IST. For more news and updates on politics, world, sports, entertainment and lifestyle, log on to our website latestly.com).