In the finals of the then World Cup in Malaysia, India defeated South Africa to win by 12 runs by the Duckworth-Lewis method. 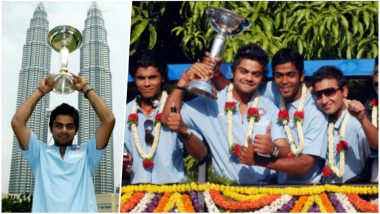 New Delhi, March 2: On this day in the year 2008, India under-19 cricket team, spearheaded by Virat Kohli, lifted the World cup trophy. In the finals of the then World Cup in Malaysia, India defeated South Africa to win by 12 runs by the Duckworth-Lewis method.

Coming to bat first, India were bowled out for a below-par score of 159 in 45 overs. Tanmay Srivastava top-scored for India with 46 runs after India's poor start. Skipper Kohli scored 19 runs, while Saurabh Tiwary and Manish Pandey struck 20 apiece.

For South Africa, Reeza Hendricks scored 35. Then the captain, Wayne Parnell hit 29 runs, while Bradley Barnes struck 19 as all other players failed to get double scores.

On Indian bowling side, speedster Ajitesh Argal, spinner Ravindra Jadeja and Siddarth Kaul picked two wickets each to not let the Proteas come back and to seal a 12-run win over South Africa. For Protease, Parnell, was the star as he took two Indian wickets giving away just 21 runs.

India has won the U-19 World Cup four times. Recently, the Prithvi Shaw-led side defeated Pakistan in the 2018 World Cup to bring the title home for record fourth time.

The then U-19 title winner skipper Kohli is currently the ICC ODI number one batsman. He took Test captaincy of the national team from MS Dhoni in early 2015 and has also been limited over skipper since early 2017.