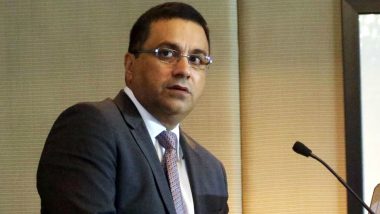 New Delhi, April 18: Citing sexual harassment charges, a lawyer has moved the Supreme Court challenging the continuation of Rahul Johri in the capacity of Board of Control for Cricket in India (BCCI) CEO. Rashmi Nair, who claims to be a women issue activist, filed the petition in the apex court and has insisted that there was every reason for BCCI Ombudsman D.K. Jain to revisit the case against Johri. BCCI CEO Rahul Johri Accused of Sexual Assault.

"Johri had a very colourful past in each and every organisation where he worked and he managed to get away with all allegations of sexual harassment levelled against him by threat, coercion or greed," the petition said.

The petitioner also sought to know why the recently appointed ombudsman was not being handed the matter for investigation. Nair in her petition cited about three women who had raised the issue.

"The three women came for deposition but for some reason one woman did not depose and the other two deposed against Johri. "After this team carried out the investigation, there was a difference of opinion between members -- Justice (retd) Rakesh Sharma, Barkha Singh and Veena Gowda -- and giving the benefit of doubt and clean chit despite one member (Gowda) found him guilty (sic)."

In the report of the independent inquiry by the committee, while Rakesh Sharma and Barkha Singh gave Johri a clean chit, Gowda had said that 'the conduct of Rahul Johri at Birmingham, as a CEO of an institution such as BCCI is unprofessional and inappropriate which would adversely affect its reputation and the same has to be looked at by the concerned authorities'.

Johri had gone to the UK during the 2017 Champions Trophy. A senior BCCI official had questioned the virtuousness of the Independent Committee itself as one of the members -- Barkha Singh -- was already a chairperson of Delhi and District Cricket Association's (DDCA) internal complaints committee when appointed in the panel to look into allegations against Johri. #MeToo in Cricket: Rahul Johri to Remain BCCI CEO, Sexual Harassment Claims Dismissed.

After the conclusion of the inquiry, the committee submitted its report to the Supreme Court-appointed Committee of Administrators (CoA) and that was published on the BCCI's website.

It read: "Since there is no consensus between the two members of the CoA regarding what action should be taken against Rahul Johri, the chairman stated that the natural consequence would be that Johri continues as the CEO of BCCI and is entitled to resume office.

"Diana Edulji (of the CoA) disagreed with this. However, the chairman reiterated that Rahul Johri should continue as the CEO of BCCI and resume his duties as a natural consequence." In her petition, Nair said there was every reason for Jain to revisit the case against Johri.

(The above story first appeared on LatestLY on Apr 18, 2019 03:29 PM IST. For more news and updates on politics, world, sports, entertainment and lifestyle, log on to our website latestly.com).