RCB are flying high after a terrific win over Lucknow Super Giants in IPL 2022 on Wednesday. Rajasthan Royals on the other hand, lost to Gujarat Titans in the first Qualifier. 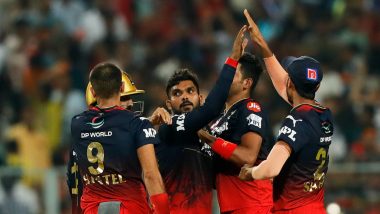 Royal Challengers Bangalore, with a ton of momentum behind them, would now head to Qualifier 2 in Ahmedabad to face Rajasthan Royals in Qualifier 2 on Friday, May 27. The match would be played at the Narendra Modi Stadium in Ahmedabad and is scheduled to begin at 7:30 pm IST (Indian Standard Time). RCB's triumvirate--Faf du Plessis, Virat Kohli and Glenn Maxwell failed to get going and it seemed that an exit from the competition was on the cards. But Rajat Patidar, who was at the other end of the crease, had other plans. He stepped up big time to score a magnificent hundred and help his team end with 207/4. Eventually, it was 14 runs too many for Lucknow, who were knocked out of the competition. Virat Kohli Lauds Rajat Patidar for His Century During RCB’s Win Over LSG in IPL 2022 Eliminator (Watch Video)

Rajasthan Royals, on the other hand, had to suffer a defeat in the first Qualifier on the back of a poor bowling effort against Gujarat Titans. They would undoubtedly be low on confidence. But the biggest positive for them would be Jos Buttler's return to form. With him scoring runs at the top of the order, Rajasthan can expect another power-packed batting show. But they need to work on their bowling if they are to compete toe-to-toe with an in-form RCB outfit.

Royal Challengers Bangalore are favourites to win the game according to bookamakers. As per Bet365, RCB have betting odds of 1.80 as compared to Rajasthan Royals, whose betting odds are 2.00.

Royal Challengers Bangalore hold a slight advantage when it comes to winning probability. According to Google Predictions, RCB have a 52% win probability as compared to Rajasthan Royals' 48%. However, it has to be kept in mind that this will change when the game starts and progresses.

(Disclaimer: Betting is illegal in India. LatestLY does not promote betting).

(The above story first appeared on LatestLY on May 26, 2022 02:36 PM IST. For more news and updates on politics, world, sports, entertainment and lifestyle, log on to our website latestly.com).