Flying high on confidence, Chennai Super Kings (CSK) will be eyeing to keep their winning momentum flowing when they face Royal Challengers Bangalore (RCB) in an Indian Premier League (IPL) tie at the M. Chinnaswamy Stadium here on Wednesday. 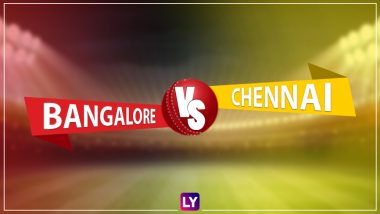 Bengaluru, April 25:  Flying high on confidence, Chennai Super Kings (CSK) will be eyeing to keep their winning momentum flowing when they face Royal Challengers Bangalore (RCB) in an Indian Premier League (IPL) tie at the M. Chinnaswamy Stadium here on Wednesday. The Mahendra Singh Dhoni-led Chennai side, who staged a comeback in the cash-rich league after two years, has yet again shown why they are considered the IPL's most successful team.

The yellow brigade has won four of their five games and most of their batsmen have fired on more than one occasion, guiding CSK home. With the likes of in-form Ambati Rayudu, Shane Watson, Suresh Raina, Dwayne Bravo and the skipper himself, CSK has the ability to put a massive total on board or chase any challenging target.

In the bowling department, young Deepak Chahar and Shardul Thakur have been impressed with each bagging six wickets from five and four games respectively. While Chahar has an economy rate of 7.60, Thakur has been a bit expensive with 9.50 runs per over.

Also, all-rounder Watson has six wickets to his name with an economy of under eight. Leg-spinner Imran Tahir, medium-pacer Dwayne Bravo and leggie Karn Sharma have also come with breakthroughs for CSK at crucial times.

On the other hand, RCB, led by Virat Kohli are placed six in the points-table with just a couple of wins from five games. Despite having stars like AB De Villiers, Mandeep Singh, Quinton de Kock and Brendon McCullum, Bangalore's batting has been inconsistent, except for Kohli.

The RCB skipper has accumulated 231 runs in five games, averaging 57.75. If De Villiers, who blasted an unbeaten 90 off 39 balls in RCB's last game against Delhi Daredevils, repeats the show, life would be difficult for Chennai.

Bangalore however, has failed to find the perfect opening partnerships, which could be a major cause of concern. In the bowling department, the spin duo of Yuzuvendra Chahal and Washington Sundar, who have bagged five and four wickets respectively, will again be eager to put a better show as CSK have struggled against spin this season.

All-rounder Chris Woakes has been outstanding so far, picking up 8 wickets, while pacer Umesh Yadav also been equally good with eight wickets. Overall, an exciting contest will be on cards when the two sides resume their intense rivalry after two years at the batting-friendly Chinnaswamy wicket.

(The above story first appeared on LatestLY on Apr 25, 2018 11:45 AM IST. For more news and updates on politics, world, sports, entertainment and lifestyle, log on to our website latestly.com).