Suryakumar Yadav did the rescue act for Mumbai once again this season with his second consecutive fifty but that was not enough as RCB secured a seven-wicket win with nine balls to spare. Mumbai Indians thus remained winless for four matches in a row. 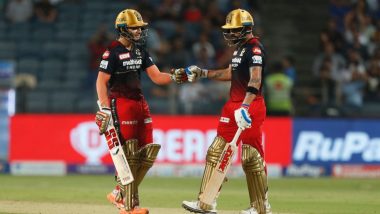 Royal Challengers Bangalore continued their good form in IPL 2022 with their third consecutive victory with a seven-wicket win over Mumbai Indians at the MCA Stadium in Pune on Saturday, April 9. Mumbai Indians thus ended up with four successive defeats in the competition. Suryakumar Yadav once again was Mumbai's saviour with the bat as his fighting 68 off 37 balls helped his side post 151/6 after a batting collapse. RCB's Anuj Rawat then did his part, scoring 66 off 47 deliveries with six sixes and two fours as he along with Virat Kohli put together 80 runs to seal the win for their side.  Virat Kohli vs Rohit Sharma: IPL 2022 Fan Poll During RCB vs MI Answers Which Indian Stalwart is More Stylish Stroke-Player!

But Kohli was not a happy man as the game drew to a close with Dewald Brevis dismissing him with his very first ball in the IPL. TV replays showed a slight inside edge but it was ruled against Kohli as the batter, having done well for his 48 off 36, left the ground livid with the decision.

Batting first, Mumbai Indians got off to a good start with skipper Rohit Sharma and Ishan Kishan having a 50-run opening stand. At one point in time, it looked as if Mumbai would score something well past 180 with these two in good form. But that was not the case as from 50/1, Mumbai Indians found themselves in deep deep trouble with a batting collapse, at 79/6 in the 14th over. But Suryakumar Yadav continued his rich form since his return to the squad with a blazing 68-run knock, that helped Mumbai Indians cross the 150-run mark, something that was not enough in the end. He was once again the lone warrior but with lack of support at the other end, Mumbai Indians had to stay happy with 151/6 on the board.  Wanindu Hasaranga (2/28) and Harshal Patel (2/23) were the best bowlers for RCB on the night.

#Virat Kohli becomes the first batsman in the IPL history to have 550 fours and 200 sixes.

#This was RCB's fourth consecutive fifty over Mumbai Indians

Confident with three wins on the trot, RCB will next face defending champions Chennai Super Kings on Tuesday, April 12. Mumbai Indians, on the other hand, will continue their search for their first win in IPL 2022 when they take on Punjab Kings on April 13.

(The above story first appeared on LatestLY on Apr 10, 2022 12:05 AM IST. For more news and updates on politics, world, sports, entertainment and lifestyle, log on to our website latestly.com).