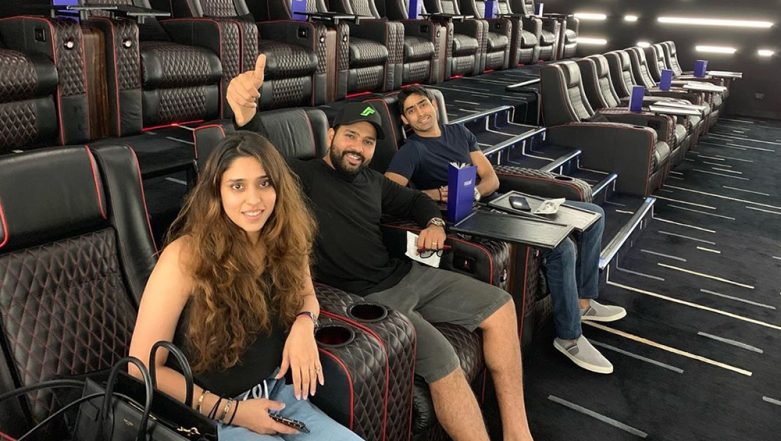 Before the start of India’s tour of West Indies 2019, Rohit Sharma is taking full efforts to convert his holiday time to family time. The Indian opener will soon depart for West Indies for the series but he is taking all care to have some great time with his wife. The Indian cricketer watched newly released Hollywood film Lion King with his ladylove Ritika Sajdeh. The couple had an amazing time while watching the film and Ritika’s brother also accompanied them for the film. Anushka Sharma Posts Cryptic Instagram Story After Rohit Sharma Unfollows Virat Kohli and Her on the Social Networking Site.

Sharma also shared the photo of the moment on Instagram. In the photo, Rohit, Ritika and Kunal Sajdeh can be seen sitting in a film theatre. “Lion King time fellas”, Sharma wrote along with the photo. Have a look at the photo below.

Ritika had also accompanied Rohit during ICC Cricket World Cup 2019. She was seen at the ground during India’s clashes. Despite India’s unfortunate exit in World Cup 2019, Sharma was spectacular with the bat being a leading run-scorer. He also created a record for the most number of centuries in a single World Cup with five hundred. Being the leading run-scorer, he was also awarded the golden bat. After Unfollowing Virat Kohli, Rohit Sharma Reportedly Unfollows Anushka Sharma on Instagram.

Sharma is also part of forthcoming India vs West Indies 2019 tour, where will be playing ODI, T20 and Tests series. The tour will start with three-match T20 series between India and West Indies, followed by three-match ODI and two-match Test series. The tour will commence with the first T20 on August 3. Virat Kohli is the captain in all the three series while Sharma will be leading as vice-captain in ODI and T20 series. In Tests, Ajinkya Rahane will be the vice-captain of the Indian team.