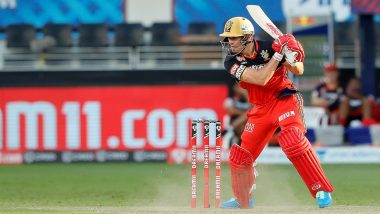 AB de Villiers unleashes carnage yet again as Royal Challengers Bangalore defeated Rajasthan Royals by seven wickets in Dream11 Indian Premier League (IPL) 2020. Chasing 178 at the Dubai International Cricket Stadium, RCB lost Aaron Finch earlier and were on the back foot. Virat Kohli and Devdutt Padikkal steadied the ship with a 79-run stand, but the scoring rate was always on the lower side. Bangalore’s misery increased further when Padikkal and Kohli were dismissed on consecutive deliveries. However, AB de Villiers came out at number four and took over the baton brilliantly. The Proteas dasher smashed giant sixes all over the park as RCB crossed the line with two balls to spare. RR vs RCB Highlights Dream11 IPL 2020.

Earlier in the day, RR skipper Steve Smith won the toss and elected to bat first. Surprisingly, the in-form Jos Buttler was dropped down the order as Robin Uthappa, and Ben Stokes came out to bat. The decision didn’t prove to be a disastrous one as Uthappa got his lost touch and scored a quick-fire 41. Skipper Steve Smith was another standout performer for the Men in Pink as he scored an impressive half-century. As a result, RR powered to 177/6, which eventually didn’t prove to be enough. For RCB, Chris Morris was the pick of the bowlers with four wickets. Meanwhile, let’s look at the stat highlights of the encounter. IPL 2020 Points Table Updated.

# De Villiers also smashed his fourth fifty in IPL 2020, joint-most for any batsman alongside KL Rahul

# The former South Africa Captain has now scored 12 IPL fifties in less than 25 balls, joint-most for any batsman alongside David Warner.

This was RCB’s sixth victory in nine games, and they are just a couple of wins away from securing a place in the playoffs. Their next match is against Kolkata Knight Riders in Abu Dhabi on October 21. On the other hand, the Men in Pink stay at the seventh position and only an exceptional effort will take them to the final four. Their next assignment is against Chennai Super Kings on October 19 in Abu Dhabi.

(The above story first appeared on LatestLY on Oct 17, 2020 07:43 PM IST. For more news and updates on politics, world, sports, entertainment and lifestyle, log on to our website latestly.com).