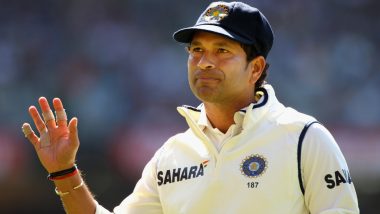 "Ken Rutherford captained one of the President's XI (teams), against (India) and Sachin played the tour game, and I remember Rutherford discussing at a team meeting, ‘This guy has a lot of time and looks a very, very special talent.' I suppose, in a way, it was sort of ridiculous because he was like a guy who could have been in the first year of school. He was 17," Morrison said on 'The Edges & Sledged' podcast.

"Here he was playing international cricket and looked beautiful getting into line, sometimes leaving Richard Hadlee with a beautiful shape and that. Sachin Tendulkar Shares Throwback Picture on Instagram, Mumbai Indians 'Icon' Says There Was a Time 'When All One Had to Only Worry About Was Rain'.

"I mean, early on, it's going to be intimidating, like for all of us, your first Test match, first series. I think he had played one Test against Pakistan. This was the actual first full series he was getting and he was up against Hadlee, who was... I mean, yeah, at the end of his career, but still, one hell of a bowler," added the 54-year old also known for his entertaining commentary these days.

Tendulkar hit a strokeful 88 and was on the brink of becoming the youngest Test centurion, overtaking Mushtaq Mohammad who scored a 101 against India in 1961, at the age of 17 years and 78 days.

But Morrison said it was a rush of blood that led to Tendulkar's dismissal as the 'Little Master' was caught by his future India coach John Wright off Morrison's bowling.

"When I look at that and remember, yeah, a couple of shots... I remember the 88 he got in Napier, and he was in such a hurry! I think he hit me for three fours in this one over, and you could see that impetuous nature of the youth and he wanted to keep going, he ended up smashing me to John Wright (at mid-off)," Morrison recalled.

"That was it, and hence saying he was so impetuous because he could have been the youngest ever, and you could see it took him an age to get off the ground. (It was) like a snowball rolling down the hill, getting bigger and bigger, just getting boom, boom, boom until it went bust, sort of hit a tree down the mountain, which was a shame for Indian fans because he was going so beautifully. Got out for 88. Sachin Tendulkar Congratulate Stuart Broad For Picking 500th Test Wicket.

"But that's the game, he could have been out on the second ball or whatever, playing a shot like that, but he was on a roll. Real talent, no doubt about that," he added.

(The above story first appeared on LatestLY on Jul 31, 2020 04:09 PM IST. For more news and updates on politics, world, sports, entertainment and lifestyle, log on to our website latestly.com).