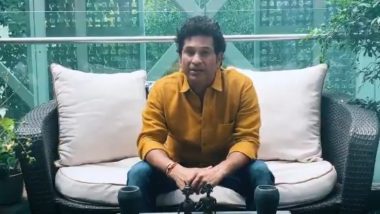 Sachin Tendulkar has revealed his list of five favourite all-rounders in the world of cricket. The Master Blaster, who celebrated his 47th birthday recently, said Kapil Dev, Imran Khan, Sir Richard Hadlee, Malcolm Marshall and Ian Botham are his top five all-rounders. "I grew up watching the top five all-rounders of the world. I played with one of them which is Kapil Dev. Second would be when I had gone on to my first tour to Pakistan and played against Imran Khan," said Tendulkar during Star Sports' Cricket Connected show. ‘Don’t Talk to Sachin Tendulkar, You’ll Be in Pain’: Brett Lee Reveals Glenn McGrath’s Advise Against Sledging Master Blaster.

"The third was playing against Sir Richard Hadlee on my second tour to New Zealand. Then in Australia I played against Malcolm Marshall and Ian Botham. So, these are my top five all-rounders whom I grew up watching play and later, had the opportunity to play against them,” he added.

During the show, Tendulkar urged people to stay indoors and follow the guidelines of the government as they fight the pandemic. "My message to my loved ones is that for so many years they have wished well for me and my way of wishing well for them would be to give them a message that they should stay at home and be safe. Whenever I went out to bat, they wanted me to score runs and not get out. So here, I want them to stay safe and secure and stay healthy and not get out. Like they wanted me to stay in the crease, I want them to stay in the crease," he said.

(The above story first appeared on LatestLY on Apr 26, 2020 04:21 PM IST. For more news and updates on politics, world, sports, entertainment and lifestyle, log on to our website latestly.com).