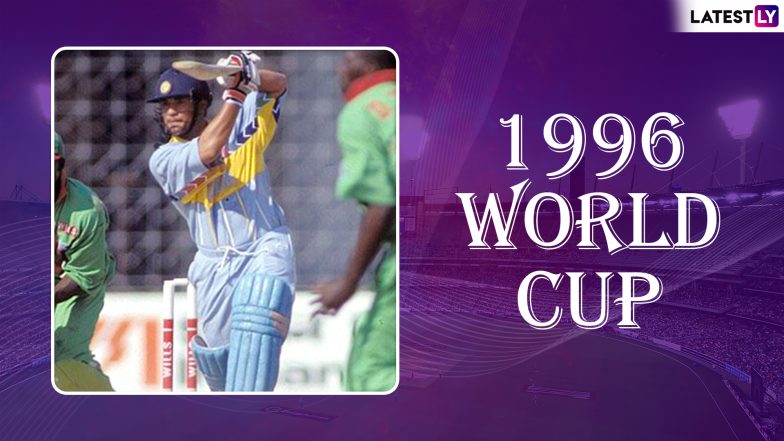 The 1996 Cricket World Cup, also known as Wills World Cup 1996, was the sixth edition of the world tournament and the second World Cup that batting legend Sachin Tendulkar played in. In the first of our six part special series on Master Blaster’s journey in the ICC Cricket World Cups, we took you through the 1992 World Cup, where Sachin made his arrival at ICC’s pinnacle tournament. In this part, we recall Sachin’s growth and performance at the 1996 World Cup, which consolidated his position as One-Day Cricket’s top batsman. Schedule of Team India at ICC Cricket World Cup 2019: List of Indian Team’s Matches, Time Table, Date, Venue and Squad Details.

The 1996 World Cup was jointly hosted by India, Pakistan and Sri Lanka. This was the second time when the World Cup was being held in Asia, after the 1987 World Cup was hosted by India and Pakistan. A total of 12 teams, including the three associate members, Kenya, Netherlands and United Arab Emirates, participated in the tournament. The teams were divided in Group A and Group B, with each group comprising of six teams. Sachin Tendulkar Remembers India's 2011 Cricket World Cup Victory on 8th Anniversary, Watch Video.

India entered the tournament as favourites along with Australia. India was placed in Group A along with Sri Lanka, Australia, West Indies, Zimbabwe and Kenya. India opened their World Cup campaign against Kenya on February 18, 1996 at Cuttack. Sachin Tendulkar Bats For India vs Pakistan in ICC Cricket World Cup 2019, Says ‘Would Hate to Give Away Two Points’.

India won the toss and decided to bowl first in the match. Kenya could manage 199/5 in their 50 overs. Chasing 200 for victory, India came out with all guns blazing as Sachin Tendulkar and Ajay Jadeja took the Kenya bowlers to the cleaners. The duo put up a partnership of 163 before Jadeja was dismissed. However, India lost two quick wickets as Navjot Singh Sidhu and Vinod Kambli were dismissed cheaply.

But Sachin held on to one end like a rock, and not only brought up his first hundred at the World Cup but also guided India to victory comfortably, in 41.5 overs. Sachin scored 127 not out off 138 balls with the help of 15 fours and one six.

After Kenya, India faced West Indies in its second match of the tournament. West Indies won the toss and elected to bat first at Gwalior wicket. However, a tight bowling performance by India limited West Indies to a below par total of 173. Manoj Prabhakar was the pick of the bowlers, picking up 3 wickets in the match.

Though West Indies had only 173 to defend, the Carribean bowling line-up had the destructive duo of Curtly Ambrose and Courtney Walsh. Once again, it was Sachin who stood tall and scored a fluent 70 to help India chase the target.

Facing a formidable Australian side at his home ground, Sachin Tendulkar had his task cut out. Australia won the toss and decided to bat first at the Mumbai wicket, which was known to slow down. Thanks to a brilliant hundred by Mark Waugh, Australia put up 258 on the board and India required 259 to win against a bowling attack that boasted of names like Glenn McGrath, Damien Fleming and the legendary Shane Warne.

Sachin opened the batting as always and stunned the Australian team as well as the fans with his mesmerising stroke-play. Sachin was at his explosive best against McGrath and Warne and proved to the world why he was the best. However, other batsmen were not up to the task and after Sachin departed for a very well played 90, India lost the match by 16 runs.

After the loss to Australia at Mumbai, India was looking to win their contest against Sri Lanka. The toss was won by Sri Lankan skipper Arjuna Ranatunga, who decided to field first at the Delhi track. Sri Lanka had a strong bowling attack with Chaminda Vaas, Muttiah Muralidharan, and Sanath Jayasuriya, but Sachin was more than ready for the challenge.

Batting first, India looked set for a big total as Sachin unleashed his shots and genius against the Lankan bowling attack. He used his feet with such finesse that even the spin on the ball rendered itself ineffective. Sachin was unconquerable that day and his innings ended on 137 as he was run-out. The whole stadium stood and applauded the Master Blaster’s effort as India ended with an above par total of 271/3.

However, Indian bowlers could not defend the total as Sri Lankan batsmen chipped in with important knocks and guided their team home in the match. Sri Lanka won the match by 6 wickets and eight balls to spare.

Coming into the match after two back-to-back loses, India needed a win at any cost. Zimbabwe won the toss and elected to field first. India managed to score 247/5 thanks to Vinod Kambli’s century and Navjot Singh Sidhu’s 80. Sachin got out cheaply in the game and was dismissed for just three runs, experiencing a rare failure in the tournament. India won the match by 40 runs.

Pakistan were the defending champions and the match between India and Pakistan generated a lot of interest. India won the toss and decided to bat first. With bowlers such as Waqar Younis, Aaqib Javed, Ata-ur-Rehman, Mushtaq Ahmed. Sachin had a decent start, but got out at 31. However, the 90 runs partnership between him and Navjot Singh Sidhu, including the last overs hitting by Ajay Jadeja, set the base for India’s 287/8 in 50 overs.

Pakistan in reply was dismissed for 248/9 and India won the match by 39 runs. India reached the semi-finals of 1996 World Cup thanks to the victory against Pakistan.

India faced Sri Lanka at the first semi-final of the 1996 World Cup. Even though India had lost an earlier match to Sri Lanka in the Group stage, they were considered as favourites going into the match. India won the toss and elected to field first.

A tight bowling effort from the Indian bowlers but a middle order resurgence saw Sri Lanka post a fighting total of 251/8. With India needing to score 252 to secure a place in the World Cup finals, Sachin came out all guns blazing and gave India a great start. His 65 was a composed knock that provided India the foundation it needed.

However, an error on Sachin’s part led to him getting stumped on the bowling of Sanath Jayasuriya. When Sachin departed, India’s score was 98-2. But India lost the next six wickets for just 22 runs and was 120-8, when the match had to be awarded to Sri Lanka by default following the crowd burning papers and causing riot like situation at the Eden Gardens. Sri Lanka went on to make it to their first World Cup final, and lifted the trophy beating Australia in the finals.

Though India’s journey in the 1996 World Cup ended at the semi-finals stage, Sachin managed to dazzle the World Cup by his batting display. He scored 523 runs in the tournament and proved his supremacy as a batsman in ODI cricket. He also scored two centuries in the World Cup, and earned the title of Master Blaster.