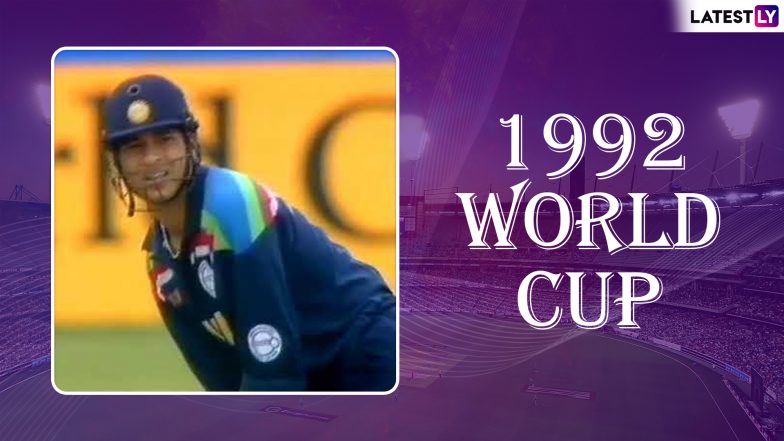 However, it all started at the Benson & Hedges World Cup 1992 jointly hosted by Australia and New Zealand. The World Cup was Sachin’s first and gave the world a sign of things to come. Sachin was still a teenager when he played at the international tournament. Interestingly, Sachin was a ball-boy at the previous Cricket World Cup which was held in 1987 hosted jointly by India and Pakistan. On Sachin Tendulkar's Birthday, ICC Picks Master Blaster's Five Best Cricket World Cup Knocks.

Though India’s performance at the 1992 World Cup was average, Sachin emerged as the batsman to look out for. Out of the eight matches that India played at the World Cup, the team could win only two matches, one against Pakistan and another against Zimbabwe. Sachin was adjudged the Man of the Match in both the games. Schedule of Team India at ICC Cricket World Cup 2019: List of Indian Team’s Matches, Time Table, Date, Venue and Squad Details.

Against Pakistan, Sachin scored 54 not out facing a bowling attack that comprised names such as Imran Khan, Wasim Akram, Aaqib Javed, Mushtaq Ahmed and others at the Sydney Cricket Ground in match 16 of the tournament. His half-century and Kapil Dev’s cameo of 35 helped India post a target of 217 on the board. Report Card of Indian Cricketers at IPL 2019: Here’s How 15 Players Selected for ICC World Cup 2019 Team Fared in IPL 12.

Sachin produced an all-round effort and ended up with bowling figures of 37/1 in his 10 overs, picking the important wicket of Aamir Sohail who looked set for a big one and threatened to take the match away from India. Team India won the match by 43 runs.

In another batting display, Sachin scored 81 against Zimbabwe at Hamilton in match 19 of the World Cup. Sachin scored at more than run a ball and had come to bat at number four position. In a rain hit game, India scored 203/7 in 32 overs, largely due to Sachin’s innings.

Watch Sachin's Batting in the Match in Video Below

Zimbabwe were given a revised target of 159 in 20 overs but ended up at 104/1 in 19.1 overs. Sachin picked up the only wicket which fell in the Zimbabwe innings. India Jersey for ICC Cricket World Cup 2019: Check Out Indian Cricket Team's World Cup Kit Over the Years (See Pics).

India had an unfortunate start to the 1992 World Cup, as they lost two close encounters in the opening two matches. Starting the World Cup campaign against England, India lost by 9 runs chasing 237 at WACA Ground, Perth. Against Australia, India lost by 1 run at Brisbane Cricket Ground, as Mohammed Azharuddin’s 93 proved to be in vain. The match against Sri Lanka had to be called off due to rain.

India then went on to lose against West Indies, New Zealand and South Africa. However, Sachin’s 84 against New Zealand at Dunedin proved how good a batsman he was at such an early age. Sachin's memorable straight drive and cover drives were on display as he showed his prowess on the off side.

Sachin finished the 1992 Cricket World Cup with 283 runs to his name with an impressing average of 47. He also won two man of the match awards, against Pakistan and Zimbabwe.

Remembering the 1992 World Cup years later, Sachin was quoted saying by the ICC that, “To play against them (the big names) was always a wonderful challenge, which I enjoyed”. The 1992 Cricket World Cup was just a sign of things to come in the subsequent World Cups, where Sachin would unleash his genius and fury on bowlers from around the globe.

From 1992 to 2011, Sachin played a total of six World Cups, a record he shares with Pakistan's Javed Miandad. The batting great holds a number of ICC Cricket World Cup records. The "Master Blaster" scored 2,278 runs at the biggest Cricketing event in the world, in the six editions he played. The second highest is Australia's Ricky Pointing, who is more than 500 runs behind Sachin.

Sachin also has to his name the most number of 50s and 100s in the World Cups, and leads the centuries list with six hundreds and 15 half-centuries in the six editions of the World Cups. In ICC Cricket World Cup 2003, the legend scored 673 runs in 11 games, which is still a record for highest number of runs scored by a player in single edition of Cricket's biggest and toughest tournament.