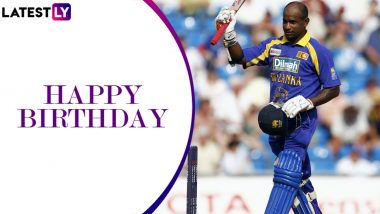 One of the greatest all-rounders to have ever stepped onto the cricket field, Sanath Jayasuriya celebrates his 51st birthday on Tuesday (June 30). Born in 1969, the southpaw destroyed many potent bowling line-ups in his illustrious career. Along with his batting prowess, Jayasuriya was also a more than useful left-arm spinner, who used to provide important breakthroughs to his team. In fact, he played a key role in guiding Sri Lanka to the 1996 World Cup title. Although, Jayasuriya proved his mettle against many teams. However, his love for the Indian side was arguably up above all. The former all-rounder put up numerous magnificent performances against the neighbouring team. Below, we’ll have a look at some of them. Sanath Jayasuriya Urges Fans to Stay Safe and Act Responsibly Amid Coronavirus Outbreak.

As there isn't much difference in Indian and Sri Lankan conditions, Jayasuriya enjoyed the battle against the Men in Blue. The likes of Anil Kumble, Javagal Srinath and Harbhajan Singh also couldn't restrict the destructive southpaw as Jayasuriya registered as many as 10 international centuries against the neighbours. Also, his highest Test and ODI score, 340 and 189, came against India only. Also, in some matches, the left-arm spinner tormented the Men in Blue with the ball in hand. Focusing on the topic, let's revisit Sanath Jayasuriya's five of the best performances against India.

History was created when India meet Sri Lanka in the first Test of 1997 Tour. After winning the toss, the visitors declared at a mammoth total of 537/8 and were well set on the driver’s seat. In reply, however, the Lankan batsman put up a stupendous performance. Opening the innings, Jayasuriya played a marathon knock and scored a splendid triple ton. It was also highest Test score. Riding on his efforts, the Lankans posted 952/6 which is the team total in Test cricket to date. The match resulted in a draw.

Jayasuriya followed his triple-century with another stupendous knock in the second game of the series. After getting dismissed for just 32 in the first innings, the left-handed batsman went back to his prime in the third innings of the game. The opener attacked the Indian bowlers from the outset as fans forgot that it was an ODI match. He, however, missed his double century by mere one run and the game eventually was drawn.

Sharjah has experienced storms on many occasions. Jayasuriya also showcased on in the finals of Coca-Cola Champions Trophy 2000. The destructive opener made his intentions clear from the first ball as the likes of Zaheer Khan and Ajit Agarkar looked completely helpless. He became even more aggressive after completing his century and he also looked all set to become the first batsman to hit an ODI double hundred. However, Indian skipper Sourav Ganguly accounted for his wicket in the penultimate over and he was dismissed for 189. Chasing 300 for victory, India were bundled out for mere 54 runs and lost the game by 245 runs.

Batting first in the 4th match of Pepsi Independence Cup 1997, the Men in Blue could only post 225/7 and the track looked ideal for bowling. However, that wasn’t the case when Jayasuriya took the field in the second innings. He made a mockery of Indian bowlers by taking them to cleaners. Although wickets kept tumbling at the other hand but the dasher was in full flow as he played a colossal knock and guided his team to a five-wicket victory.

Another Sanath Jayasuriya special against India came during the 7th match of 1998 Nidahas Trophy. Not with the bat, however, but with the ball in hand. In the rain-affected encounter, Sri Lanka posted 171-8 while batting first. Mohammad Azharuddin were firm favourites to clinch the encounter. However, Jayasuriya had different ideas. The left-arm spinner ran through India’s middle order and took four important wickets. His efforts proved to be fruitful as the Lankans won the game by eight runs.

After serving Sri Lanka for more than two decades, Jayasuriya bided adieu to the game in June 2011. He, however, continued to serve Sri Lankan cricket through the administration department. In 2013, in fact, he was appointed as the Chairman of selectors in 2013 by Sri Lankan Cricket Board. However, in 2019, the legendary cricketer faced a two-year ban by ICC under the anti-corruption code.

(The above story first appeared on LatestLY on Jun 30, 2020 08:30 AM IST. For more news and updates on politics, world, sports, entertainment and lifestyle, log on to our website latestly.com).