During the course of the chat session on YouTube, the leg-spinner many interesting things about his on-field and off-field life. Shadab also went on to speak about two of the toughest batsmen he bowled too and the leggie picked Indian opener Rohit Sharma and former Australian captain Steve Smith. 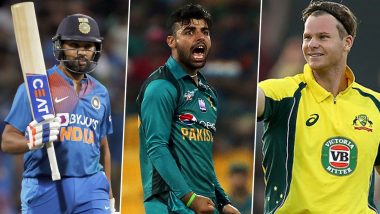 Rohit Sharma, Shadab Khan and Steve Smith (Photo Credits: Getty Images/ IANS)
Amid the COVID-19 lockdown, many prominent personalities including athletes have become active on social media to interact with their fans in this time of global crisis. Recently, Pakistani all-rounder also went live on YouTube from Islamabad United's account to answer queries. During the course of the chat session, the leg-spinner many interesting things about his on-field and off-field life. Shadab also went on to speak about two of the toughest batsmen he bowled too and the leggie picked Indian opener Rohit Sharma and former Australian captain Steve Smith. Pakistan Is Brazil of Cricket Because of Raw Talent, Says Wasim Akram.

The 21-year old cricketer has delivered several impressive spells in his short but impressive career. However, he particularly struggled against India and Australia where he was smashed for runs and was not getting wickets either.

While talking about Smith, Shadab said that bowling to the right-handed batsman on Australian is quite a tough job as the tracks down under doesn't favour the spinners. " I bowled to Smith in Australia where the ball doesn’t spin much," said Shadab during the live chat session on YouTube.

Speaking about Rohit, the Mianwali-born cricketer revealed that the margin of error against the Indian opener is very small and thus a small mistake can cost you runs. " But I find Rohit Sharma difficult after him because the margin of error while bowling to him is very small. You will be hit for sixes if you bowl in his zone," Shadab added. The leggie has played four ODIs against India with two of them seeing Rohit scoring a century.

The star cricketer was last seen in action during the 2020 edition of the Pakistan Super League (PSL) which was suspended in between owing to the global health scare. Shadab, however, showcased brilliant form in the tournament and impressed one and all with both bat and ball. Unfortunately, his side failed to qualify for the knock-out matches.

(The above story first appeared on LatestLY on Apr 06, 2020 10:53 PM IST. For more news and updates on politics, world, sports, entertainment and lifestyle, log on to our website latestly.com).