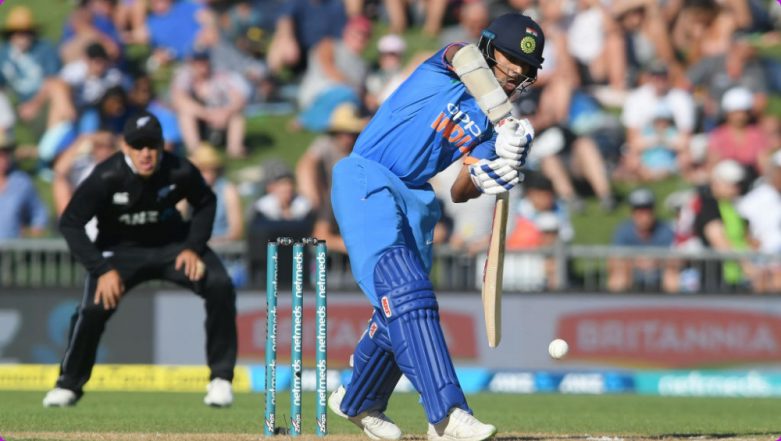 Left-handed opening batsman on Wednesday (January 23) completed his 5000 runs in One-Day Internationals (ODI). Dhawan achieved the feat during the first ODI between India and New Zealand at McLean Park in Napier. By doing so, Dhawan became the second fastest Indian batsman to achieve the feat. India captain Virat Kohli holds the first spot. While Kohli took 104 innings to reach the milestone, for Dhawan the achievement came in 118 innings. Ind vs Nz 1st ODI Live Score Updates.

At the start of the innings, Dhawan needed just 18 runs to complete the milestone and he did it with ease after India were set a target of paltry 158 by New Zealand. Overall, Dhawan is the joint-third fastest batsman to score 5000 ODI runs. Dhawan joins former West Indies captain Brian Lara.

Meanwhile, India were inching towards the victory in the first ODI against the Blackcaps. Chasing 158, India were 41/0 in nine overs at the break with Dhawan and Rohit Sharma going strong.

Earlier, Kiwis opted to bat first and were undone by some superb bowling by India. Mohammed Shami made early inroads by removing openers, Martin Guptill and Colin Munro. In the process, Shami became the fastest Indian bowler to complete 100 ODI wickets.

After Shami, spinners Yuzvendra Chahal and Kuldeep Yadav took over and shared seven wickets between them. Part-time spinner Kedar Jadhav also chipped in with a wicket as Kiwis were restricted to under 200.