Shoaib Akhtar praised Rahul Dravid for his stoic defence and his gritty approach to batting and said that he feels that The Wall is the most decorated Indian batsman. Akhtar also picked Jacques Kallis as one of the best all-rounders of all-time and his former Pakistan captain Inzamam-ul-Haq as the batsman he could never clean-bowl. 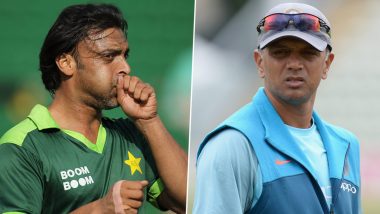 Rahul Dravid is widely celebrated as one of the greatest batsmen of all-time let alone this generation. His rock-solid defence and gritty approached have earned him the title — The Wall of Indian cricket. Dravid with over 24, 000 international runs is also one of the most decorated batsmen in world cricket but to former Pakistan speedster Shoaib Akhtar, Dravid is the most decorated Indian batsman. Akhtar, who enjoyed many duels with Dravid during India vs Pakistan matches, picked the 47-year-old as the best Indian batsman for his stoic defence and firm approach. Sachin Tendulkar Closed His Eyes While Facing Shoaib Akhtar’s Bouncers: Mohammad Asif Recalls India vs Pakistan Karachi Test in 2006.

“Among Indians, Rahul Dravid is the most decorated batsman. If he won’t offer me a shot, I would not be able to penetrate his defence,” Akhtar told former Indian cricketer and commentator Sanjay Manjrekar during a talk show on ESPNcricinfo. Akhtar has multiple duels with Draid during IND vs PAK cricket matches and said that Dravid was very difficult to get out as he would defend most times. Shoaib Akhtar Talks About Virat Kohli, Says ‘We Would Have Been Best Enemies on the Field’.

Akhtar also picked Jacques Kallis as one of the best all-rounders of all-time and his former Pakistan captain Inzamam-ul-Haq as the batsman he could never clean-bowl. “To be honest, it’s Inzamam-ul-Haq. See my action is very complicated unlike Bret Lee’s but I could not bowl him out even once in the nets in 10 years. I think he could read the ball a second faster than others,” said Akhtar before adding that he also thinks “Jacques Kallis is one of the best all-rounders, and slip fielders cricket has ever produced,” he said.

Akhtar also said that like Inzamam, Virender Sehwag also could play him easily but added that unlike his former Pakistan teammate, he had bowled Sehwag multiple times. “I bowled him short initially when I should have bowled the ball that’s going away from him. After I figured him, he could not score much against me. I bowled him out on multiple occasions, including at the IPL and in Lahore in.”

(The above story first appeared on LatestLY on May 28, 2020 12:52 PM IST. For more news and updates on politics, world, sports, entertainment and lifestyle, log on to our website latestly.com).