Chasing 399 runs at the deteriorating Old Trafford pitch in Manchester, the visitors never looked in the hunt as wickets were falling in regular intervals. Rain tried to help them as the fifth Day’s play was interrupted on three occasions. However, the England pacers didn’t take a lot of time in wrapping up the Windies innings. 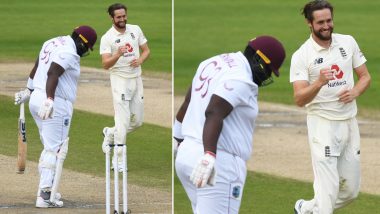 Chris Woakes and Stuart Broad breathed fire with the ball on Day 5 and England won the third Test against West Indies by 269 runs. Chasing 399 runs at the deteriorating Old Trafford pitch in Manchester, the visitors never looked in the hunt as wickets were falling in regular intervals. Rain tried to help them as the fifth Day’s play was interrupted on three occasions. However, the England pacers didn’t take a lot of time in wrapping up the Windies innings. Chris Woakes claimed a sensational five-wicket haul in the last innings while Stuart Broad registered a 10-wicket haul in the match. Twitterati was impressed by England’s clinical performance as the Three Lions were hailed from head to toe. England vs West Indies 3rd Test Match Report.

Earlier in the match, the home side scored 369 while batting first thanks to half-centuries from Rory Burns, Ollie Pope, Jos Buttler and Stuart Broad. In reply, West Indies were bundled out for 197 runs as Broad registered his 18th five-wicket haul. England declared at 226-2 in the third innings and tightened their grip over the match even more. England vs West Indies Highlights, 3rd Test 2020 Day 5.

Chasing 399 runs, the visitors again got off to a worst possible start as they lost two wickets inside 10 runs. England could have completed their victory on Day 4 only. However, weather gods intervened as not a single ball was bowled on the fourth day. Nevertheless, England completed the formalities on Day 5 and clinched the match and the series too. Now, let’s look at how netizens celebrated England’s thumping victory. Stuart Broad Becomes Seventh Bowler to Take 500 Wickets in Test Cricket.

Has there been a more memorable way to enter into the 500 club? Man of the series after being dropped in the first match! #Stuartbroad #ENGvWI #ENGvsWI pic.twitter.com/8OXEKiMmW4

Teams Winning most tests since 2011.

While watching #ENGvsWI today, I had promised my mother that, I will give her remote to watch her daily soaps at 7.30pm. And guess what WI helped me in keeping it.

Under Par Performance by The Visitors!!

#ENGvsWI started on a great note for Windies but by the time series finished, it was again the old West Indies which keeps disappointing after raising hopes. #ENGvsWI pic.twitter.com/wGj7Ipa0ri

Stuart Broad help England to become first team in the history of Cricket to win two consecutive Test series after coming from behind. They won their last series, just before panademic against South Africa after 0-1, they repeat same against West Indies here. #ENGvWI #ENGvsWI

After some brilliant contest in the longest format of the game, cricket fans must brace themselves as action in white-ball cricket is also set to return. England and West Indies will lock horns in a three-match ODI series, starting from July 30.

(The above story first appeared on LatestLY on Jul 28, 2020 08:06 PM IST. For more news and updates on politics, world, sports, entertainment and lifestyle, log on to our website latestly.com).