Suresh Raina Playing With Son Rio Is the Cutest Video You Will Find on Internet Today! Take a Look at Some More Pictures of This Lovely Father-Son Duo 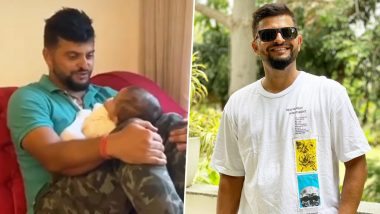 Suresh Raina is certainly making most of his time off the cricket field. The team India and Chennai Super Kings (CSK) veteran has been enjoying his time with his children Gracia and Rio with cricket events suspended due to the coronavirus pandemic. Raina has also been keeping his fans updated and makes regular posts on his social media pages. In his latest video, the 33-year-old can be seen playing and cuddling with his son Rio. The father and son duo will certainly win your heart with this cute video. Suresh Raina Takes Daughter Gracia on Drive Amid Delhi Rains (Watch Video).

In the video, Raina can be seen sitting on a couch with Rio on his laps. He can be seen playing with his four-month-old son and even making funny faces to make the child smile. Rio is also enjoying this moment with his father and flings his hands in excitement. This is perhaps the cutest video you will find on the Internet today. Take a look at the video and how the father-son pair enjoy their time together. Suresh Raina Trains with Mohammed Shami and Piyush Chawla in Nets (Watch Video).

Suresh Raina's Favourite Thing to Do These Days

My favourite thing to do these days 😍 He is so talkative already! #Rio pic.twitter.com/IrsxhPnarj

Raina has been having some great time with his family during the lockdown due to COVDI-19 and has been uploading some lovely pictures with his daughter Gracia and son Rio. Take a look at some pictures of Raina and his son Rio.

Such a curious cat he is! All he wants these days is to explore everything around him.🕉❤️

‪My little princess turned four years old today. These four years have been priceless for us. You fill our heart with so much pride & love everyday. All I wish for you is immense joy & happiness always. Love you Gracia. ❤️🦄‬ #HappyBirthdayGracia

The beginning of all things – wonder, hope, possibilities and a better world! We are proud to welcome our son & Gracia’s little brother - Rio Raina. May he flows beyond boundaries, bringing peace, renewal & prosperity to everyone’s life.

Meanwhile, the 33-year-old left-handed batsman has resumed training in Ghaziabad and was recently seen training alongside fellow left-hander Rishabh Pant. Raina will be next seen in action when IPL 2020 begins. Season 13 of the Indian Premier League is set to be played in UAE and could reportedly begin on September 26. Raina, who is the vice-captain of CSK and one of their most experienced batsman, will be gunning to lead the franchise to a fourth IPL title.

(The above story first appeared on LatestLY on Jul 23, 2020 07:47 PM IST. For more news and updates on politics, world, sports, entertainment and lifestyle, log on to our website latestly.com).