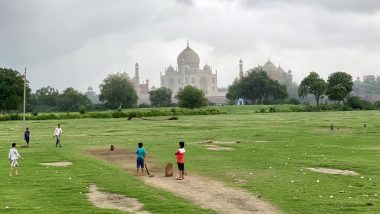 During these tough times amid coronavirus pandemic, where the entire world has come to a halt and people have been confined inside their homes, sport is one major factor giving hope to everyone that things can go back to the way it was. Several competitions in football, cricket, and basketball have resumed after a long break as some sort of normalcy has returned around the globe. DRS Without Technology! Ravi Ashwin Shares Hilarious Video of Kids Enacting Use of Decision Review System in Gully Cricket.

In the clip, a number of kids could be seen playing cricket in front of the monument in an empty green field. The kids were there all by themselves as one of the world’s wonders remains closed due to the current circumstances.

Cricket in Front of Taj Mahal

Taj Mahal is currently shut down amid the coronavirus pandemic as Indian government have withdrawn the plan of its reopening citing the risk of new coronavirus infections spreading in Agra from visitors flocking to see the 17th-century monument to love. ‘In the interest of the public, it has been decided that opening monuments in Agra will not be advisable as of now’ the local authorities said in July.

Speaking of cricket, the sport resumed last month with a three-match Test series between England and West Indies. The matches were played behind closed doors as no fans were allowed inside the stadiums in order to maintain the social distancing protocols amid the pandemic.

Indian cricketers will be back in action when they travel to UAE to take part in the latest edition of Indian Premier League. IPL 2020 is scheduled to start in September this year after the governing council received official permission from the government to host the tournament. The cash-rich league was originally planned in March 2020 but had to be postponed.

(The above story first appeared on LatestLY on Aug 14, 2020 01:39 PM IST. For more news and updates on politics, world, sports, entertainment and lifestyle, log on to our website latestly.com).