Pakistan Super League (PSL) franchise Islamabad United urged its followers to stay at home but used an image of Jasprit Bumrah’s no-ball from the 2017 ICC Champions Trophy final against Pakistan to promote social-isolation and were brutally trolled by Indian fans. 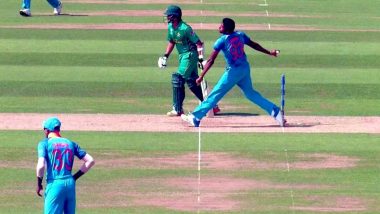 With coronavirus pandemic causing havoc worldwide, most countries have gone into lockdown and have advised their citizens to stay indoors to avoid getting diagnosed with the disease. Many sporting associations have also made use of their reach among the fans to advise them against stepping out and have preached the necessity to stay at home for one’s own protection. Pakistan Super League (PSL) franchise Islamabad United also made a similar urge to its followers but used an image of Jasprit Bumrah’s no-ball from the 2017 ICC Champions Trophy final against Pakistan to promote social-isolation and were brutally trolled by Indian fans. Babar Azam Gives an Overwhelming Reply to 5-Year Old Fan’s Tribute, Says 'Study Hard, Play Harder'.

Bumrah had dismissed Pakistan opening batsman Fakhar Zaman when the latter was batting on 3 during the India vs Pakistan 2017 ICC Champions Trophy final at Lord’s. But replays showed that the Indian pacer had over-stepped his line and Zaman was given not-out. The left-hander then went on to record his maiden ODI century and completely took the game out of India’s grasp with Pakistan eventually winning the trophy by thrashing India by 180 runs.

Don't Cross Line. It Can Be Costly!!

❗️ Don't cross the line. It can be costly ❗️

And making use of Bumrah’s infamous no-ball, Islamabad United urged its followers to stay indoors. “Don't cross the line. It can be costly,” the PSL franchise captioned its tweet in which Bumrah’s can be seen bowling his wicket-taking 'no ball' delivery during the final. “Don't leave your homes unnecessarily, MAINTAIN PHYSICAL DISTANCE but make sure your hearts remain close,” the tweet further read.

Well, Here You Have to Learn How to Cross the Line

Here's hoping you will CROSS THE LINE just once after this is all over ;) pic.twitter.com/axJtZHtV17

This From the Indian Side of Trolls

Trolls Have no Grace...

What Happens When You Cross the Line

Indians won't give a damn to this pic because we have better example about Aamir which will even make Pakistanis to stay inside and follow the rules or else u will be jailed and called cheaters throughout ur life .#icc #cheaters #matchfixers #cricket #jailed pic.twitter.com/Kc25NEnoRh

You mean not to cross like this.. cheap advertisers know your limit before posting anything.. of course the whole world remebers what happed when he crossed the line pic.twitter.com/MLOk5r7hUz

Fans, however, took note of Islamabad United’s cheeky post and brought-out Mohammad Asif’s no-ball during Pakistan vs England Test match in 2010 to mock the PSL franchise. Indians fans, in particular, took offence of the tweet and poked fun at Pakistan for Asif’s no-ball which earned him-- Salman Butt and Mohammad Amir -  a five-year ban from all forms of sport for spot-fixing. Some others also took a dig Pakistan’s failure to cross the line against India in World Cup matches. The intent in using Bumrah’s image may not have been anything bad but fans disapproved Islamabad United’s way of using it and trolled them.

Bumrah is, however, yet to comment on the tweet. The 26-year-old Indian fast bowler had earlier reacted to Jaipur Police when the organization had used the no-ball image as a warning to avoid breaking traffic rules. "This shows how much respect you get after giving your best for the country,” Bumrah had said back then, reacting to Jaipur police using his no-ball image from the Champions Trophy.

(The above story first appeared on LatestLY on Apr 03, 2020 09:01 PM IST. For more news and updates on politics, world, sports, entertainment and lifestyle, log on to our website latestly.com).