Vinay Kumar Best IPL Performances: 4/40 Against CSK and Other Top Spells by the Karnataka Cricketer

Vinay Kumar played for Royal Challengers Bangalore, Kochi Tuskers, Kolkata Knight Riders and Mumbai Indians in his IPL career with his last stint coming with KKR in IPL 2018. He picked 105 wickets from as many matches at a strike rate of 20.20 with an 8.39 economy rate. He lifted the IPL once with KKR in 2014 and with Mumbai in 2015 and 2017. 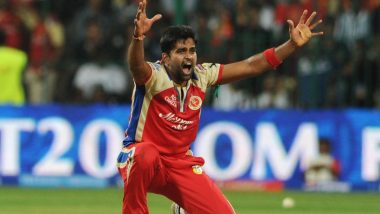 Vinay Kumar has announced his retirement from first-class and international cricket bringing down the curtains on a 16-year stellar career. Kumar, 37, made his first-class debut for Karnataka in 2004 and retires with 504 first-class wickets in 139 matches. With 442 wickets in the Ranji Trophy, Kumar is the all-time leading wicket-taker among pacers and the fourth-highest in the overall Ranji list. Kumar also went on to represent India in all three forms featuring mostly in the ODIs. Kumar played 105 times in the Indian Premier League (IPL). As he retires from the game, take a look at his best performances in the IPL. R Vinay Kumar Announces Retirement from First-Class and International Cricket.

Kumar played for Royal Challengers Bangalore (RCB), Kochi Tuskers, Kolkata Knight Riders and Mumbai Indians in his IPL career with his last stint coming with KKR in IPL 2018. He picked 105 wickets from as many IPL matches at a strike rate of 20.20 and with an 8.39 economy rate. He lifted the IPL once with KKR in 2014 and with the Mumbai Indians in 2015 and 2017. Yusuf Pathan Retires: Netizens Congratulate Former Indian Cricketer For His Prolific Career (Check Reactions).

Kumar was RCB’s star bowler in the previous edition of the IPL picking 16 wickets in the team’s run to the final. His best figures in the tournament however came in the following season when he picked 4/40 against southern rivals Chennai Super Kings and guided RCB to a 36-run win. Kumar removed Parthiv Patel in the first over of CSK’s chase and also went to dismiss George Bailey, Suresh Raina and S Badrinath.

Kumar took 3/18 in his four-over spell in another match-winning performance for RCB. With the Royals struggling after RP Singh and Ravi Rampaul had run through their top-order, Kumar knocked RR out of the match with two wickets. He dismissed Stuart Binny and Brad Hodge and then returned to clean-up Sreesanth for a duck.

Thankyou all for your love and support throughout my career. Today I hang up my boots. 🙏🙏❤️ #ProudIndian pic.twitter.com/ht0THqWTdP

Another Vinay Kumar special came during the Royal Challengers Bengaluru vs Mumbai Indias clash in IPL 2013. Defending a small target of 156 runs, Kumar scalped big fishes like Dinesh Karthik, Rohit Sharma and Ambati Rayudu while conceding only 27 runs. As a result, Mumbai fell two runs short of RCB's total and lost the game.

Kumar once again shone for RCB and took 3/22 against Deccan Chargers, albeit in a losing cause. Kumar dismissed Parthiv Patel, Akshath and Ashish Reddy to help restrict DC to 132 runs but RCB failed to chase down the target and came short by nine runs.

Kumar’s only Test for India came against Australia in 2012. He also played 31 ODI matches and nine Twenty20 internationals. But Kumar’s international career was short-lived and his last appearance in the India jersey came in 2013 before he was sidelined. Once his international career was over, Kumar starred for Karnataka in the domestic circuit and captained his state team to domestic treble – Ranji Trophy, Vijay Hazare and Irani Cup – twice in three seasons.

(The above story first appeared on LatestLY on Feb 26, 2021 05:47 PM IST. For more news and updates on politics, world, sports, entertainment and lifestyle, log on to our website latestly.com).