Kohli missed the second Test in Johannesburg with back spasms. The Test series is currently levelled 1-1 after South Africa clinched a seven-wicket victory. India would eye a maiden Test series win in South Africa when they take them on in the third Test in Cape Town. 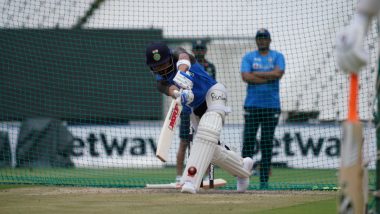 India team head coach Rahul Dravid provided a fitness update on Virat Kohli, saying that he should be 'good to go' in the third Test against South Africa in Cape Town. Kohli missed out of the second Test match in Johannesburg due to back spasms and according to information from Dravid, the 33-year old has trained and rested and should be ready to lead the side once again.  "Virat Kohli should be fine from all accounts, he should be fine. He has had the opportunity to run around a little bit, he has had the opportunity to test it a little bit. Hopefully, with a couple of net sessions in Cape Town, he should be good to go. Everything I am hearing and just having a chat with him, he should be good to go in four days time," Dravid, while speaking at a press conference, said.  David Warner Opens Up on Being Dropped As Sunrisers Hyderabad Captain, Backs Out-of-Form Virat Kohli

Kohli's presence was dearly missed by India as they succumbed to a seven-wicket loss to South Africa, who levelled the series 1-1. With the bat, the Indian middle-order looked weaker without him. India batted first and managed to score just 202 in the first innings. While speaking about India's average batting performance so far in this series, Dravid said, "It has been challenging wickets for both the teams, South Africa's fourth innings was probably their best with the bat. Yes, as a batting unit we can look to seize a few key moments and when we get partnerships, we can look to make them longer. It was challenging in the first innings but we could have gotten 55-60 runs more which could have made a huge difference."

India take on South Africa in the third and final Test of the series in Cape Town on January 11.

(The above story first appeared on LatestLY on Jan 08, 2022 10:16 AM IST. For more news and updates on politics, world, sports, entertainment and lifestyle, log on to our website latestly.com).