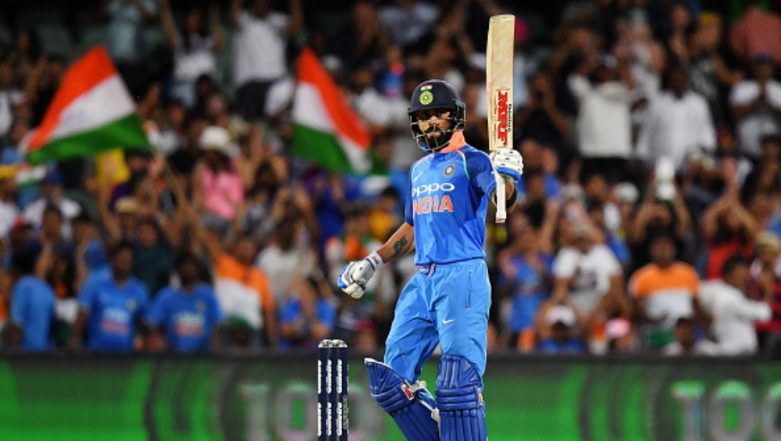 Breaking records and creating new ones seem to be a daily business of India captain Virat Kohli. Now, during India vs New Zealand, 1st ODI that Virat Kohli broke another record. Kohli went on to surpass West Indies’ legend Brian Lara and registered his name amongst the top 10 leading ODI run-scorers. The India captain achieved this feat once he reached the score of 18. In 2017 and 18 the Indian captain has scored more than 12 centuries and thus has become the highest scorer of the year. Now, with this record, his fans surely expect Kohli to even surpass Sachin Tendulkar’s record soon. Sun Stops Play During IND vs NZ 1st ODI; CSK’s Funny Reaction is Too Good to Be Missed.

Kohli surpassed Lara's tally of ODI runs in only his 220th ODI. He boasts of an average of nearly 60 which is the highest in the 10K club. Whereas, Lara took 299 ODI games to reach the record. Virat Kohli is now also within touching distance of Rahul Dravid, who scored 10889 runs from 344 ODIs. Kohli achieved with feat with a stunning boundary. Mohammed Shami Becomes Fastest Indian Bowler to Take 100 Wickets in ODIs, Accounts for Martin Guptill to Achieve the Feat; Watch Video Highlights of Ind vs NZ 1st ODI.

Talking about the match today, the Indians won the game by 8 wickets. Shikhar Dhawan and Mohammed Shami also achieved a few milestones today. Dhawan became the fast Indian to score 5000 ODI runs. He went past Sourav Ganguly and MS Dhoni to join the elite list. However, Virat Kohli remains on number one. Whereas, Mohammed Shami became the fastest Indian bowler to snap 100 wickets. He went past Irfan Pathan.