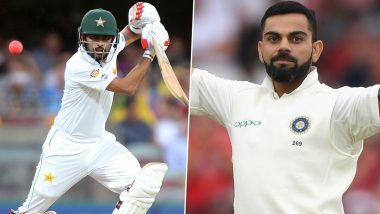 Batting in English conditions in Test matches is certainly a jolting task for any batsmen and even the best the business has failed on England soil in their first few assignments. However, that wasn’t the case with Babar Azam who played a scintillating knock during the England vs Pakistan 1st Test. Coming to bat at number four at the Old Trafford in Manchester, the right-handed batsman brilliantly tackled England pacers and scored 69 off 106 deliveries. Twitterati were highly impressed by Azam’s stellar show in Manchester as they heaped praises on him. While doing so, however, netizens also remembered how Indian captain Virat Kohli failed in his first Test series on England soil in 2014. Pakistan vs England Live Score Updates of 1st Test Day 2.

The current second-ranked Test batsman was troubled by swinging red cherry throughout the five-match series as he didn’t beach the 50-run mark even once. In 10 innings, Kohli scored 134 runs at an average of 13.4 runs. His dismal performance clearly exhibited the challenge a young batsman faces on England soil. To the contrary, Azam, who was playing his second Test match in England, played a magnificent knock. However, his dismissal against James Anderson gave the fans another reason to draw comparisons between him and Kohli. Virat Kohli Recalls Failure in 2014 England Tour, Calls It ‘Milestone’ in His Career.

The Indian batting stalwart was largely troubled by the out-swinging deliveries of Anderson in 2014 as he often got dismissed by guiding the ball to the first or second slip. Well, the case was the same with Babar as he nicked an out-swinging ball by Anderson only and Joe Root did the rest at the first slip. Meanwhile, let’s look at how Twitterati presented their views on Kohli vs Azam debate.

#Babar_Azam ahead of Virat Kohli ➡ Smith and Kane Williamson

For Those who are comparing virat kohli with babar Azam ! pic.twitter.com/WEcV61gCSQ

Anderson was in a very good touch in 2014 Kohli was young as Babar. But kohli backed again and score three or two tons one was missed in 2018. Good point bro.

I am tired of comparing Babar Azam with Kohli. He is much better. Kohli has people like Rohit Sharma, Dhawan and quality batting line playing around him while Babar Azam is standing all alone usually. The pressure on Babar Azam to perform at that level is manifolds that on Kohli.

Notably, when India toured England in 2018, Kohli was the captain of the team and the ghosts of 2014 series were beside him. However, he rose to the occasion this time and scored 593 runs in five matches which also included two marvellous centuries. Well, there’s a reason why he’s regarded as one of the best batsmen of all time. However, it will be interesting to see if Babar, who’s just 25, can reach his level or not.

(The above story first appeared on LatestLY on Aug 06, 2020 05:43 PM IST. For more news and updates on politics, world, sports, entertainment and lifestyle, log on to our website latestly.com).