Virender Sehwag Expresses His Love for Dogs on Social Media, Says ‘Dogs Do Speak, but to Those Who Know to Listen’ 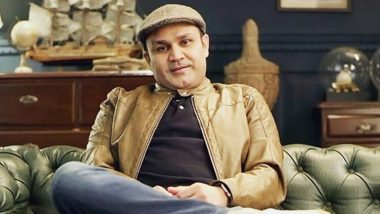 New Delhi, August 9: Dashing former India opener Virender Sehwag is known for his love for dogs and on Sunday he once again took to social media to express the same. "Dogs do speak, but to those who know to listen," Sehwag said in an Instagram post with a picture of him standing with his two dogs. On Saturday, opening pair of batting greats Sachin Tendulkar and Sehwag joined hands once again, this time to bless Yuzvendra Chahal after the India leg-spinner announced his engagement with choreographer and YouTube personality Dhanashree Verma.

Dogs do speak , but to those who know to listen #dogstagram

Meanwhile, India captain Virat Kohli on Sunday took to social media to share his excitement at the prospect of leading Royal Challengers Bangalore (RCB) in the 13th edition of the Indian Premier League (IPL) which is set to begin from September 19 in the UAE.

RCB -- one of only three yet to get their hands on the coveted trophy -- have made it to three finals, but have returned with the runners-up medal on each occasion. "Loyalty above everything. Can't wait for what's to come," Kohli said in a tweet with video snippets of his time at RCB.

(The above story first appeared on LatestLY on Aug 09, 2020 09:31 PM IST. For more news and updates on politics, world, sports, entertainment and lifestyle, log on to our website latestly.com).