Virender Sehwag, Saina Nehwal, Saqlain Mushtaq and Other Sports Personalities Line up to Wish Sachin Tendulkar on his 45th Birthday

As it’s Tendulkar’s birthday, social networking sites Twitter and Facebook were abuzz with wishes pouring in for the ‘little master’. 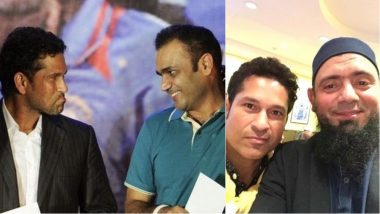 Former Indian cricketer Sachin Tendulkar today turned 45. Born on April 24, 1973, in Mumbai, Tendulkar needs no introduction as he is arguably the best batsman the game of cricket has ever produced. The ‘Master Blaster’ as he is fondly called retired from cricket in November 2013. Even after his retirement, there is no dip in his popularity. He continues to hold the majority of batting records, like most runs in Tests and One-Day Internationals (ODIs). Apart from it, Tendulkar has the most number of centuries in both Tests and ODIs as well.

As it’s Tendulkar’s birthday, social networking sites Twitter and Facebook were abuzz with wishes pouring in for the ‘little master’. Apparently, #HappyBirthdaySachin was trending on Twitter. Cricketers, as well as other sports personalities, made it mandatory to wish the ‘God of Cricket’ on his birthday.

Leading the list was Tendulkar’s opening partner Virender Sehwag, who was at his usual best. He wrote, “Woh sirf ek Cricketer nahi, Duniya hai Meri! aur bahuton ki. Many more happy returns of the day to a man who could stop time in India (literally) .Thank you for making the Cricket Bat such a great weapon, which later many like me could also use.”

Viru at his usual best!

Many more happy returns of the day to a man who could stop time in India (literally) .Thank you for making the Cricket Bat such a great weapon, which later many like me could also use. #HappyBirthdaySachin pic.twitter.com/TVtpaxSiJz

Saina Nehwal too has a birthday greeting for the legend

Wish from across the border

Centurion 2003 was one of the best days in my life.Not just because we beat Pakistan in a WC match but because I got to witness from a distance of just 22 yards,a display of focus,intensity & genius.What a man, your glory will be unsurpassed @sachin_rt paaji #HappyBirthdaySachin pic.twitter.com/VspBUC6tVp

Happy Birthday dear @sachin_rt . You are and will always remain an inspiration . It’s wonderful to see you contribute towards society with some really good initiatives even after your retirement. Wish you success always. #HappyBirthdaySachin pic.twitter.com/aWQxZ9kRjV

From one champ to another

Many many happy returns of the day @sachin_rt sir . Here’s to you on this very special day. I… https://t.co/hZTxRteVhg

Wish you a very happy birthday sir @sachin_rt . You are an inspiration for not just me but for millions. pic.twitter.com/GVWnEkH2SV

And, one from King Kohli as well

Wish you a very Happy Birthday @sachin_rt Paaji. 🤗😊 You are and will always be the real Master Blaster! 🙏👏

Tendulkar himself took to social media sites and posted a video message for his fans. In the video, Tendulkar said, “Thank you for your birthday wishes. I know since past 12 am the messages have been pouring in. It means a lot to me, thank you so very much for all the good wishes.”

(The above story first appeared on LatestLY on Apr 24, 2018 04:54 PM IST. For more news and updates on politics, world, sports, entertainment and lifestyle, log on to our website latestly.com).