Sachin Tendulkar Turns 45: 10 Cool Facts About the Cricketing Legend to Celebrate his Birthday

Sachin Tendulkar is unarguably one of the finest cricketers that Indian Cricket has ever produced. 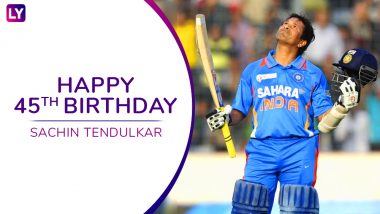 Sachin Tendulkar is unarguably one of the finest cricketers that Indian Cricket has ever produced. When most youngsters have not even crossed the fences of the school, 16 – year-old Sachin  was already facing the pacers in  Karachi against Pakistan in 1989, thus making his debut. Only half way through his career, Wisden Cricketers' Almanack ranked him the second greatest Test batsman of all time, behind Don Bradman, and the second greatest ODI batsman of all time, behind Viv Richards. There is hardly any achievements that the Master Blaster has not achieved thus he is addressed as the ‘God of Cricket’. Here are some cool facts about the right-hander.

We wish the master blaster a very HAPPY BIRTHDAY.

(The above story first appeared on LatestLY on Apr 24, 2018 12:02 AM IST. For more news and updates on politics, world, sports, entertainment and lifestyle, log on to our website latestly.com).