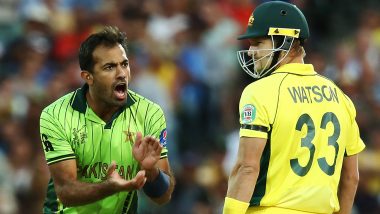 Pakistan pacer Wahab Riaz celebrates his 35th birthday on Sunday (June 28, 2020) and wishes are pouring in for him from all around the world. On the occasion, International Cricket Council (ICC) shared the video of Wahab’s fiery spell against Australia in the quarter-final of 2015 World Cup. Defending a small total of 213 in Adelaide, the Men in Yellow looked all set to win the encounter. However, Wahab bowled his heart out and tormented the Aussie batsmen. In fact, his rivalry with Shane Watson in that game will be remembered for a long time. Wahab Riaz Birthday Special: 5/46 vs India in 2011 World Cup Semi-Final and Other Stupendous Performances.

By dismissing the likes of David Warner and the then skipper Michael Clarke, Riaz gave some to the Pakistan team to cause an upset. He also would have dismissed Watson early in the innings. However, he didn’t get much support from the other end as the Men in Yellow went on to win the game by six wickets. The figures of 2/54 might not look extra-ordinary but this doesn’t showcase Riaz’s performance. "One of the fastest spells I have seen in a long time,” said Michael Clarke in the post-match presentation. Meanwhile, let’s look at the throwback video shared by ICC.

Riaz will be next seen in action when Pakistan will tour England for three Tests and as many T20Is. The left-arm pacer will definitely play a crucial role in white-ball games. However, he has also expressed his desire to play Test matches again. Notably, Riaz announced his retirement from the longest format last year and it will be interesting to see if he’ll get a chance to serve Pakistan in whites again.

(The above story first appeared on LatestLY on Jun 28, 2020 02:49 PM IST. For more news and updates on politics, world, sports, entertainment and lifestyle, log on to our website latestly.com).