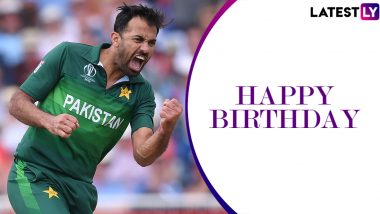 Pakistan pacer Wahab Riaz celebrates his 35th birthday on Sunday (June 28, 2020). The left-arm speedster can set the speed gun on fire and his ability to move the ball both ways makes him even more lethal. Riaz has the knack of disturbing the batsman with a barrage of bouncers before rattling his stumps with pin-point yorkers. Owing to injuries, Riaz might not boast off a sensational record in international cricket. However, he has a knack of delivering in big stages like World Cups. Below, we'll look at some of his best performances. Six Pakistan Players Including Mohammad Hafeez and Wahab Riaz Return Negative for COVID-19 in Second Tests Conducted by PCB.

Making his debut in February 2008, Riaz impressed one and all with his raw pace. However, he couldn't immediately cement his place in the side due to the presence of pacers like Shoaib Akhtar, Umar Gul and Mohammad Asif. However, he proved his mettle in the chances he got. So far, he has claimed 83, 115 and 30 wickets in 27 Tests, 89 ODIs and 31 T20Is. Also, he has been ageing like fine wine and is getting better with time. As the talismanic pacer, let's look at some of his best performances.

During the high-voltage India vs Pakistan clash in 2011 World Cup, Wahab displayed an outstanding spell of fast bowling and dismissed five Indian batsmen. Courtesy his stellar performance, the home side could only post 260/9 while batting first. However, Pakistan lost that match by 29 runs but Wahab certainly became a star overnight.

2/54 Vs Australia in Adelaide

The bowling figures might look quite ordinary but numbers don't explain everything. Defending 213 runs in the quarter-finals of 2015 World Cup, Wahab bowled his heart out against the Aussies and put up an exhibition of fast bowling. However, he didn't get much support from the fielders as the Aussies clinched the game by six wickets.

Making his Test debut in the third Test of Pakistan's 2010 Tour of England, the left-arm speedster made an impeccable use of the red cherry and tormented the English batsmen. He dismissed the likes of Andrew Strauss, Kevin Pietersen and Eoin Morgan in the first innings to register a fantastic five-wicket haul. His efforts proved to be fruitful as the visitors went on the clinch the encounter by four wickets.

The star pacer will next be seen in action when Pakistan will tour England for three Test matches and as many T20Is. Though the matches will start in July. However, Pakistan squad to travel in a few days in order to assess the new conditions amid COVID-19 crisis. Also, Riaz, who announced his Test retirement last year, has expressed his desire to play the longest format of the game. So, it will be interesting to see if the fans can see Riaz handling the red cherry or not.

(The above story first appeared on LatestLY on Jun 28, 2020 08:00 AM IST. For more news and updates on politics, world, sports, entertainment and lifestyle, log on to our website latestly.com).