‘We Either Play in Pakistan or We Won’t Play’, Says PCB Chairman Ehsan Mani on England’s 2022 Tour 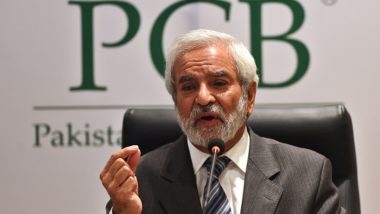 London, August 7: Pakistan Cricket Board (PCB) Chairman Ehsan Mani on Friday stated that England's 2022 tour of Pakistan won't take place at a neutral venue. England are currently scheduled to play three Tests and five ODIs in Pakistan in 2022. Pointing towards international cricket matches that were held in Pakistan in the last couple of years, Mani said the country remains safe for sports.

"I don't think there will be any reason for England not to come," Mani was quoted as saying by BBC Sport. "I'm very clear that we won't play in third countries. We either play in Pakistan or we won't play." Asia Cup 2020 Not Cancelled, Claims Ehsan Mani; PCB Chief Says 'He is Yet to Hear About it from ACC'.

Test cricket recently returned to Pakistan after a decade -- following the terrorist attack on the Sri Lankan team bus in Lahore in 2009 -- as Bangladesh travelled to the country earlier this year.

"Pakistan is safe," Mani added. "For some teams that have come we have had very tight security, like you would have for a head of state. "By the time the MCC came, they wanted to get out and play golf. They went sightseeing, they went to restaurants. "We've got two years before England come and I hope by then things have settled down and there will be more freedom of movement," he added.

(The above story first appeared on LatestLY on Aug 07, 2020 11:35 PM IST. For more news and updates on politics, world, sports, entertainment and lifestyle, log on to our website latestly.com).