Brathwaite, who followed up his momentous 489-ball 160 from the first innings with a gritty unbeaten half-century, faced a total of 673 deliveries in the match, the most by a West Indian in a single Test, surpassing Brian Lara's previous record of 582 balls against England at St John's in 2004. 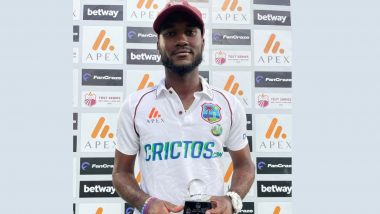 Bridgetown, March 21: West Indies skipper Kraigg Brathwaite and wicketkeeper-batter Joshua Da Silva saved the day for the hosts as the second Test against the Joe Root-led England ended in a thrilling draw at the Kensington Oval on Monday (IST).

Brathwaite survived two gruelling sessions on the final day, scoring an unbeaten 56 in his four-hour vigil at the crease, while Da Silva remained not out on 30 as West Indies closed the day on 135/5 chasing 281 to set up a third-Test decider against England in Grenada.

Brathwaite, who followed up his momentous 489-ball 160 from the first innings with a gritty unbeaten half-century, faced a total of 673 deliveries in the match, the most by a West Indian in a single Test, surpassing Brian Lara's previous record of 582 balls against England at St John's in 2004. How to Watch West Indies Women vs Pakistan Women ICC Women’s World Cup 2022 Live Streaming Online? Get Free Live Telecast of WI W vs PAK W Match & Cricket Score Updates on TV.

Only seven players since the end of timeless Tests in 1939 have ever faced more deliveries in a Test than Brathwaite's extraordinary stint, according to ICC.

England bowled with purpose in the second innings with Jack Leach spearheading the attack and emerging the most successful bowler (3/36), while Test debutant Saqib Mahmood took two wickets for 21 runs to leave West Indies struggling.

But the 30-year-old Brathwaite denied the visitors again and was congratulated by a frustrated England as Joe Root shook hands inside the final hour.

England had started the final morning on 40/0 with a lead of 136, and immediately showed their intentions for the day with an aggressive start from openers Alex Lees and Zak Crawley. But wickets fell at regular intervals throughout the morning. Three rain delays also hampered England's progress throughout the first session.

The runs still flowed before lunch for England, with Crawley (40), Dan Lawrence (41), Ben Stokes (19) and Jonny Bairstow (29) helping England reach 185/6 by the time the third weather intervention forced lunch to be taken.

England declared during the interval to leave West Indies chasing 281 and facing the prospect of surviving two sessions with the target realistically out of reach. England turned to Leach to spearhead the attack, and this time the left-armer got an early breakthrough, removing opener John Campbell for 10 to give the tourists hope. Test debutant Mahmood boosted hopes of a win when he bagged a brace with his first spell of the innings.

The right-arm pacer caught the edge of Sharmah Brooks' bat and had Root to thank for the catch after the initial chance could only be parried by Crawley. And it was Root again who took the chance when a rising delivery caught out Nkrumah Bonner. West Indies were reeling on 39/3 after 12.1 overs, with plenty of England fielders around the bat to put pressure on the hosts.

But Brathwaite and Jermaine Blackwood took the wind out of England's sails with another fine partnership, following on the back of their effort in the first innings. The 50-partnership between the pair soaked up 150 deliveries and left the visitors in a race against time, and a race against the setting sun, to get the remaining seven wickets before the close.

Two more for Leach kept the game alive going into the final hour, with Blackwood caught for 27 by a kneeling Bairstow in an unusual fielding stance at gully, and Jason Holder expertly snaffled by a diving Lawrence for a 24-ball duck. But West Indies defended their way towards a draw as the floodlights were switched, with Joshua da Silva unbeaten on 30 and Brathwaite still there on 56 when Root opted to shake hands early.

(The above story first appeared on LatestLY on Mar 21, 2022 11:55 AM IST. For more news and updates on politics, world, sports, entertainment and lifestyle, log on to our website latestly.com).